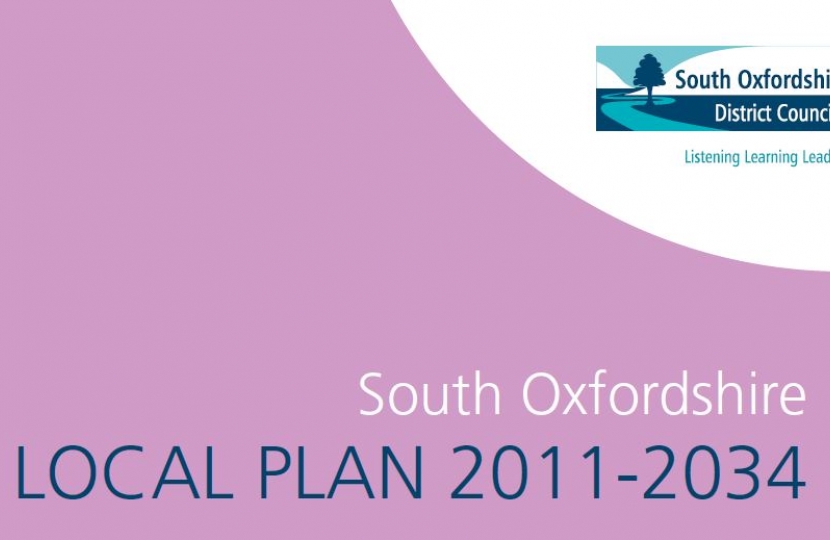 The situation with regard to SODC’s continuing ownership of its Local Plan could be easily solved by SODC.  All it needs to do is allow the Plan to continue to examination in public before a Planning Inspector and for the Council to add potentially significant amendments and modifications for the Inspector to consider.  That is the only place that one will get a definitive statement on whether, for example, the allocation of housing to the Green Belt is acceptable and proportionate and establishes a right balance or not.

Some have raised the current situation at SODC in relation to their emerging Local Plan with me. Firstly, let me be clear that I have had no part to play in the discussions between SODC and the Ministry of Housing, Communities, and Local Government (MHCLG) and was not party to the decision made by the Secretary of State. However, I do have a strong interest in planning.

The situation is well documented on SODCs website. Early in the work of the council elected in May 2019 there was an indication that they would withdraw the emerging Local Plan and the then Housing Minister wrote to the Leader expressing his concerns at the implications for wider Oxfordshire especially in relation to commitments already made. It is a shame that a promise to withdraw the Plan was not explicitly part of the election. Senior Officers in MHCLG had worked with SODC Planning Officers in the following months. The paper from SODC Officers to Cabinet on 3rd October set out three possible options and recommended the option to allow the emerging Local Plan to continue through its examination in public. Cabinet rejected this option in favour of withdrawing the emerging Local Plan and embarking on a new one. This would take adoption of a new Plan to February 2024. It was as a result of this decision that the Secretary of State intervened to put a hold on further progress.

MHCLG had recognised the ambitions of the new council and had been clear that they did not believe that continuing with the existing plan would undermine these ambitions. However, they had set out the negative implications for both SODC and for other local Oxfordshire councils in the event of withdrawal. The actions of the Secretary of State have given time for further consideration. I am committed to a local democratic process in producing Local Plans but Oxfordshire councils have to remember that they signed up to a Growth Deal as part of their commitments which came with money for new infrastructure and for affordable housing. Many of the plans containing this have themselves already been through a democratic process which needs to be balanced with that of SODC. It was, for example, as a result of my work on the Local Plan Expert Group that a new methodology for calculating housing need was established which is stronger than the previous Strategic Housing Market Assessment (SHMA) approach and takes away the potential of excessive legal wrangling over the figures. However, it produces only the starting point for calculations of final need to which councils have the choice to agree or not.

I do have concerns at the level of proposed building in the Green Belt and having campaigned for over 25 years for the protection of the Green Belt across the country, and particularly around Oxford, made my views on this known over some time. I also have concern for the many communities who have produced their own Neighbourhood Plan and who could now be in a period of uncertainty.

I wholly agree with SODC Planning Officer's that the best approach would be to allow the emerging Local Plan to continue to public examination and for there to be put forward amendments as part of this process.

I have every confidence in a Planning Inspector taking a line on issues such as the Green Belt which helps to protect it and establish a balance between the need for homes close to hubs in Oxford with respect for the Green Belt. I believe this will be the quickest way of getting a Local Plan in place and avoiding what has been described as a developer free-for-all in South Oxfordshire in the long run-up to a new Plan being put together. Benson and Chinnor are both good examples of the scale of development that could take place in the absence of a Local Plan. There is nothing I wish to see less than such a situation happening across the district. It would produce thousands of new houses and without infrastructure to support them. The consequences are all too imaginable and all too horrendous.

I do not believe that the production of our Local Plan should be in the hands of the County Council and that is not what is proposed. What is proposed is for the Plan to go before a Planning Inspector in public examination and then for the County Council to implement the approved plan in the absence of SODCs willingness to do so. This would be preferable to effectively allowing developers a free reign. In the meantime, the administration at SODC can move quickly to prevent this happening by agreeing not to withdraw the Plan and to proceed with it to Public Examination, taking the opportunity to make and explain their amendments.