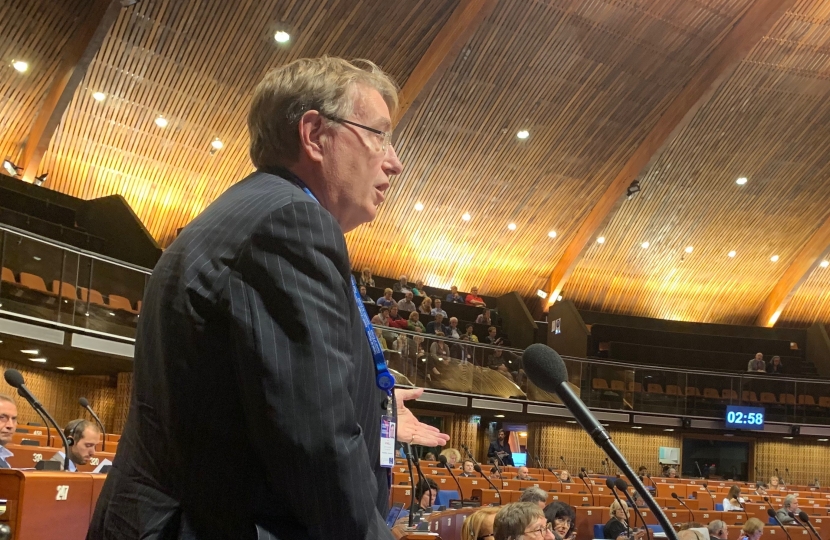 It is important that we have good relations with the wider Europe. That can be best achieved through the Council of Europe – a non-EU organisation set up after the Second World War to oversee democracy, the rule of law and human rights in Europe. These three things underpin the stability and security we all feel across the continent. The Henley constituency is part of this; it forms a part of our everyday lives. That Europe is much bigger than the EU and it is much older. It is represented by 47 countries completely separate from the EU. I am very pleased to be the Leader of the UK delegation to the Parliamentary Assembly of the Council of Europe and a Vice-President of it. The UK delegation is cross-party.

The Council covers key issues of importance to us all such as climate change. the treatment of refugees and child sexual exploitation. In France, for example, it is helping fund ground breaking cancer research. The Council meets four times a year and I have personally spoken on protecting whistle-blowers, treatment of migrants, violence against women, on extending the ombudsman schemes, and on how to run referenda. It is the Council which has led the way in gender equality, in fighting racism and antisemitism, in fighting violence against children, and, in ensuring we have access to good quality medicines and health care. All of these are important to the people of this constituency.

I have also had the honour of representing the Council itself to award a prize to the French town of Suresnes and to Germain-en-Laye for their work in human rights, in democracy and the rule of law. It is a prize which has also been won in the past by the town of Coventry.

The Parliamentary Assembly of the Council is drawn from parliamentarians across the wider Europe including Russia, Israel and the Palestinians are associate members.

John welcomes ECHR judgement on the murder of Aleksander Litvinenko

Along with colleagues of the UK Delegation to the Council of Europe John has welcomed today’s judgement of the European Court of Human Rights (ECHR) against Russia for the murder of Aleksander Litvinenko in 2006 using Polonium.

John reports on the latest session of the Council or Europe

The third part of the yearly session of the Parliamentary Assembly of the Council of Europe took place between 21 and 24 June 2021. The agenda showed the Council’s involvement in what might be called the ‘softer’ areas of its work such as the impact of Covid-19 on children’s rights, the transpare

John comments on the situation in Israel, Gaza and the Middle East

Like many of you, I am concerned by the escalation of violence in Israel, Gaza and in the Middle East.

John elected Vice-President of the Council of Europe

This week John was this week elected a Vice-President of the Parliamentary Assembly of the Council of Europe. The role involves him in acting as the equivalent of a deputy speaker of the Assembly.

John has  welcomed the adoption on 14 April of the Criminal Enforcement Law, allowing the early or conditional release of 90 000 prisoners to prevent the spread of the COVID-19 pandemic in overcrowded Turkish prisons, but has expressed regret at the discriminatory approach with regard to certain

I have just returned from a week at the Council of Europe where I represent the UK on the Parliamentary Assembly.  This body becomes more important after Brexit as it is the main body for UK parliamentarians to engage with parliamentarians from 46 other European countries.  There were a number of