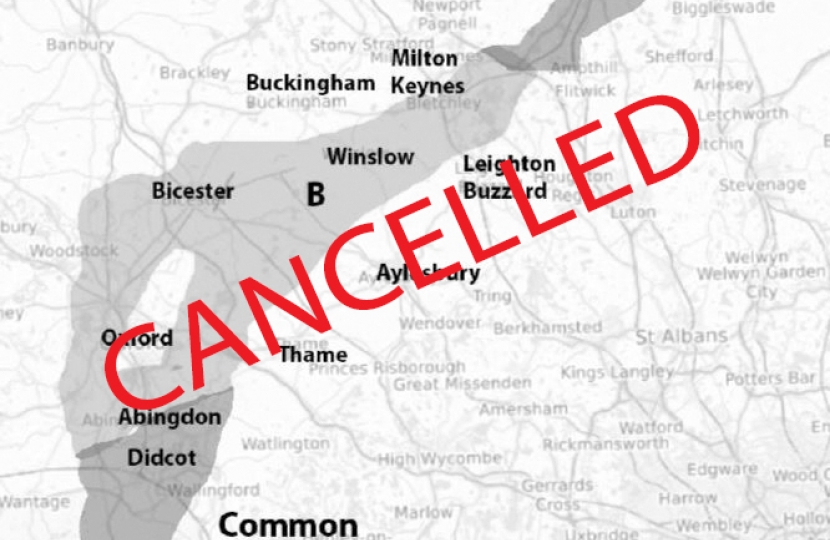 The Transport Secretary has today confirmed that the Oxford-Cambridge Expressway between Oxford and Milton Keynes has been cancelled. Work on the project was previously paused whilst the case for it was re-examined.

John said: “This is excellent news! When the work was paused in March last year it was always thought highly unlikely that it would be resumed. I am delighted that this has now been confirmed. I have worked continuously with Ministers and Highways England to raise my concerns on this project. Highways England worked closely with local representatives to look at a range of environmental concerns and I am pleased that our concerns have clearly been taken on board. This is a good example of public consultation and I have always believed that pausing the project would led to this formal cancellation.”

The proposal for the Oxford-Cambridge Expressway was put forward in 2014 under the coalition Government as part of the first Road Investment Strategy when it was announced that there was be a strategic study to examine the case for such an Expressway. Work has focussed on the development of potential options for a high-quality road link between Oxford and Milton Keynes. Extensive analysis and local engagement has not identified any options that would be cost-effective for the taxpayer.

The Government’s remains committed to the ambitions for the Oxford-Cambridge Arc and has committed to the development of a long term Oxford-Cambridge Arc Spatial Framework. It will work closely with local partners and communities to plan for a more sustainable and prosperous future for the area. There is now a substantial body of evidence from the work undertaken by Highways England which will be used to inform work to consider where more targeted, localised road improvements to connectivity may be needed within the Oxford to Cambridge corridor. The East West Rail scheme remains central to providing critical infrastructure within the Arc. This will not only improve connectivity but bring new jobs and opportunities to people and communities in the area.  In January, the Government announced a £760 million funding commitment to deliver the next phase of East West Rail.