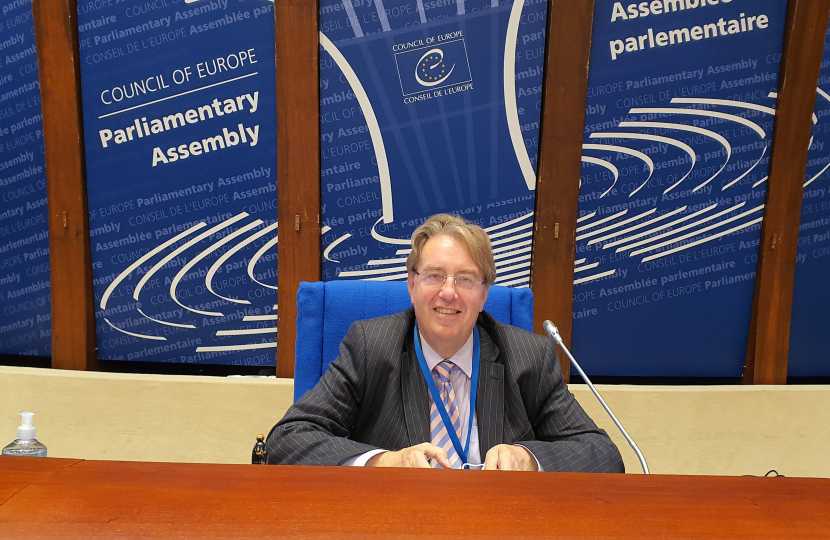 The ECtHR has not been imposed on the UK. We are a founding member of the Council of Europe. Its politics derives from Churchill. Its legal basis derives from UK lawyers. It is not a foreign court but one where we share the responsibility for ensuring that common standards prevail across Europe. The UK has its own Judge at the Court who was elected by all the countries represented in the Parliamentary Assembly. It is, in other words, a body in which the UK has full participation and membership. The distinction that is being made through the new Bill of Rights in the UK is between the operation of the ECtHR in domestic UK law and in international law. We welcome as a Delegation the opportunity to discuss many of the issues surrounding the “Rwanda case” with the UK Judge at the Court.

To confirm a point that has been raised in the UK, the ECtHR still retains a Russian Judge until 16 September in order to help clear the backlog of Russian and related cases and to allow Ukraine to bring a case there against Russia, which it has now done. Russia’s Judge is not involved in any other cases.

The Session began with a Report on the progress of the Bureau and Standing Committee of the Parliamentary Assembly and on the election observation mission in Serbia.

The role of political parties in fostering diversity and inclusion: a new Charter for a non-racist society. A Swedish MP put forward a Report which claimed that racism, xenophobia, sexism and hate speech in all its different forms was on the rise, sowing the seeds of hate.  He asked that political will should be provided to speak out against it and address this. He believed that political parties were best placed to contribute to the fight against racism and intolerance and to foster an inclusive society. The Charter of European Political Parties for a non-racist and inclusive society is based on political party self-regulatory power and he argued that a new Charter was required. Sir Tony Lloyd MP was the ‘Rapporteur for Opinion’ and pointed to the leadership required from our political parties particularly in demonstrating the case for tolerance, and in leading a change for the better. Ruth Jones MP said that a civilised society should not need to debate these basic rights, because they should be enshrined in law. Lord Griffiths made the point that hate speech can only be dealt with after people have spoken hatefully. I said that the reason for the Rapporteur seeing an increase in racism may be due to the increased scope of the definition to include Afrophobia, antigypsyism, antisemitism, Islamophobia, and xenophobia and also attacks on LGBTI people and sexism. I pointed out that the UK Parliament was one of the best parliaments in the world for the number of LGBTI people who are MPs. The pressure on political parties is best exercised by voters and this partly explains any change in attitude of the Labour Party to antisemitism.

Recent challenges to security in Europe: what role for the Council of Europe? The Council of Europe does not have a defence mandate but it can and should address current security challenges. Security is a wider concept than defence. Human rights, rule of law, the media and cyber security are important aspects of the democratic processes and we need to strengthen democratic security in Europe. Democratic security is not a new concept for the Council of Europe but the goal to make the organisation fully capable of contributing to democratic security has taken on renewed importance. Lord Foulkes said that security is not only about the architecture of security and the deployment of troops - it is much more than that. He looked at security in the context of the rule of law, human rights and democracy. Sir Tony Lloyd MP said that we should have acted earlier over Russia. He pointed out that the security of countries like Latvia, Lithuania and Estonia comes through NATO, but NATO will not solve many of the long-term security problems that we face here in Europe.

High Level Panel and interactive debate. The Assembly then held a High Level Panel discussion on upholding democratic security in Europe. The Panel comprised: Mr Simon Coveney, Minister of Foreign Affairs for the Republic of Ireland; Ms Sviatlana Tsikhanouskaya, Leader of the Belarus opposition; Mr Pekka Haavisto, Foreign Affairs Minister of Finland; and Council of Europe Secretary General Ms Marija Pejčinović Burić. Spokespersons for each of the political groups in the Assembly contributed to the debate.

The Secretary General. The Address of the Secretary General was highlighted by a point of order by Lord Foulkes who complained that filibustering had prevented him from raising a concern about the Panel which had been selected to look at the future of the Council of Europe.

The continuing need to restore human rights and the rule of law in the North Caucasus region / Reported cases of political prisoners in the Russian Federation. The debate concentrated on a plea to Russia to fulfil its human rights obligations in the North Caucasus. The Report was the result of five years of work. The debate on political prisoners highlighted the imprisonment of the joint British/Russian political prisoner Vladimir Kama-Murza in which I spoke to illustrate the aggressive manner of his arrest. This followed a meeting with his wife Evgenia.

Preventing and combating antisemitism in Europe. The debate pointed out that antisemitism was not a new phenomenon. It looked at antisemitism in the context of racism and pointed out how anti-Jewish resentment has been articulated more openly, more self-confidently and more naturally in the public sphere of communication but built upon age-old stereotypes linked with the demonisation of a people. In the Report, a wide range of best practice examples of what politics can do to prevent and combat antisemitism had been collected. Lord Russell pointed out that antisemitism was clearly wrong and used members of his own family to illustrate what could be done to combat it. Tommy Sheppard MP called for greater action to be taken to combat antisemitism across Europe. He pointed out that it was an historic problem but was happening now. Lord Griffiths said that in Britain, though antisemitism is a cross-party concern, his own party, the Labour Party, suffered years of mismanagement and a lack of leadership which allowed antisemitism to flourish. Happily, recent results indicate that relations with the Jewish community are on the mend. Sir Edward Leigh MP said that the scourge of antisemitism was something that disfigures and has disfigured large parts of Europe and European history.

Address by Her Excellency Ms Katerina Sakellaropoulou, President of the Hellenic Republic. The President talked about how the era of successive crises had disrupted the status quo of post-war Europe. Ian Liddell-Grainger MP asked a question about the extent of German-imposed austerity measures on Greece.

Humanitarian consequences and internal and external migration in connection with the aggression of the Russian Federation against Ukraine / Protection and alternative care for unaccompanied and separated migrant and refugee children / Justice and security for women in peace reconciliation. These reports looked at the largest population migration since the Second World War: the huge displacement of between 35 to 40 per cent. of the Ukrainian population. The first Report described this tragedy in terms of martyrdom. The Rapporteur limited his remarks to the humanitarian aspect of the conflict, to the humanitarian consequences and to the migrations inside and outside Ukraine. The reports also looked at alternative care for unaccompanied and separated migrants and examined the plight of refugees in the world at large. Lord Adonis said that we can and should do more to help Ukrainian refugees, pointing to clear recommendations in the reports concerning what was required.

The honouring of membership obligations to the Council of Europe by Malta. This was a debate in which I, Lord Foulkes and Sir Christopher Chope MP spoke to praise the progress made by Malta.

Ensuring accountability for the downing of flight MH17. This debate was heard in the presence of some of the families of the Dutch victims of flight MH17. The Report set out how the lives of 298 people were lost in the tragedy including 198 Dutch citizens – in all, 17 nationalities including one Romanian, who were on board flight MH17 en route from Amsterdam to Kuala Lumpur.

United Kingdom agreement on asylum seekers and the critical Government reaction regarding the European Court of Human Rights decision. The debate looked principally at two issues: (1) the morality and legality of relocating to Rwanda migrants who have entered the UK illegally while their asylum claims are processed, and, (2) the attitude of the UK Government to the European Court of Human Rights. In both parts of the debate attacks were made on the UK approach by, amongst others, Jeremy Corbyn MP, Lord Griffiths and Lord Foulkes. In particular, the accusations about the Court by the Home Secretary, although not responsible for the Court, were mentioned and disapproved of. In my contribution I quoted from a Government document I had obtained via the Ministry of Justice, that: ‘We remain a committed party to the ECHR, the rights under the Convention and indeed the Human Rights Act are retained under the Bill of Rights’; ‘The United Kingdom is committed to protecting and respecting human rights, to its membership of the Council of Europe and to its obligations under the Convention’; ‘The Government is committed to staying in the European Court of Human Rights’; ‘We recognise our obligation under the Convention to abide by judgments of the Court specifically against the United Kingdom’. The UK has the lowest number of cases per capita before the Court.

Current affairs debate: Consequences of the blockade of the Black Sea. This debate examined Russian attempts to occupy the Black Sea and the effect this had on the price and availability of foodstuffs. The implications for world food security was also examined.

The control of online communication: a threat to media pluralism, freedom of information and human dignity. In this debate Jeremy Corbyn MP pointed out that while social media and other platforms enabled people around the world to communicate with each other globally, these platforms were also controlled by very powerful people. He mentioned Julian Assange and Ms Shireen Abu Akleh.

Fighting vaccine-preventable diseases through quality services and anti-vaccine myth-busting. This Report covered human rights issues around vaccines and pointed to the responsibility of states to adopt requisite measures. Vaccination is a routine medical intervention. It continues to be the safest and most effective means of protecting against many infectious diseases. According to the World Health Organization (WHO), it prevents between two and three million deaths a year. It is calculated that an improvement in global vaccine coverage could save another million and a half people. Sir Christopher Chope MP made the point that effective systems for monitoring potential adverse effects of vaccines and independent compensation programmes need to be in place and that sadly, in respect of Covid-19 vaccines this is not happening.