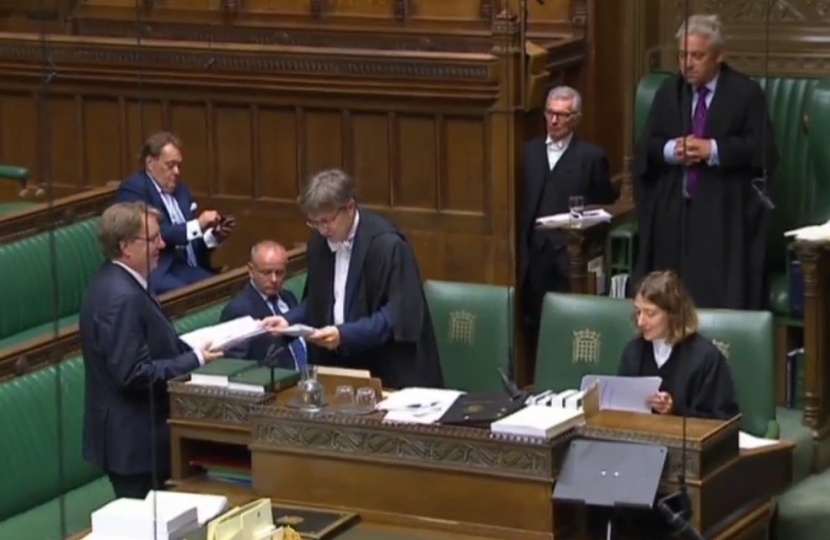 John has now received a formal response to the petitions he presented to Parliament on behalf of Gillotts School in Henley and Langtree in Woodcote earlier in the summer.

The response to the petition acknowledges that the right level of investment in schools is crucial but cannot pre-empt the detailed spending plans that are being put together for the period beyond 2019-20.  However, it acknowledges that the Education Secretary will back head teachers to have the resources they need to carry on delivering a world-class education. Since then additional money has also been pledged for education by the Prime Minister, Boris Johnson.

“I recognise that core funding for schools and high needs has risen from almost £41 billion in 2017-18 to £43.5 billion this year. But, in this constituency, the increased education budget has simply not been felt. Teachers should not have to make savings by increasing class sizes, reducing teaching hours, cutting pastoral support, and slashing service costs. Parents should not have to contribute towards running costs of their children’s school.

“I remain concerned that the figure for spending in schools beyond 2019-20 is based on an objective assessment of what it costs to provide education. I prefer the figure for each school to be a ‘hard figure’ whereby schools get the full amount they have been told to expect rather than the current ‘soft’ figure.  I will continue to press for these changes with Government.”

The Government says that it is using the new National Funding Formula to address historic injustices. But John Howell added that this needs to take into account historic injustices of a capital nature such as the state of the schools.  It also needs to recognise the difficulties for teaching staff in facing high costs in Oxfordshire the likes of which are only seen in London.

“The requirement to provide extra funding to help those pupils who are most likely to fall behind is laudable. Unfortunately, it has failed to address my fundamental concerns on historic unfairness. This needs to be looked at on a broader basis of criteria such as the effect that working in a school with poor conditions can have.”

This response reflects a long-standing commitment of the MP to education in the constituency and more generally nationally. He has asked questions of Minsters, arranged meetings for teachers and school governors with Ministers, and been part of the f40 schools funding group which campaigns for fairer funding in education.  In this context, he recently signed a letter to the Prime Minister organised within the House of Commons pointing out that across the county, schools have faced increasing costs with the national teachers’ pay award increase in 2018, the apprenticeship levy imposition, additional HR costs, increased pension costs, higher levels of special needs and higher rural bus costs, all of which are imposed as a result of Government policy.

The petitions asked for a further funding review on schools in the constituency and specifically for:

Education is key for individual life success and for the success of our economy. We need a National Funding Formula that is fair for all. I have made my concerns known on the unfairness of the current formula in Oxfordshire to the Secretary of State for Education on several occasions.