John elected Vice-President of the Council of Europe 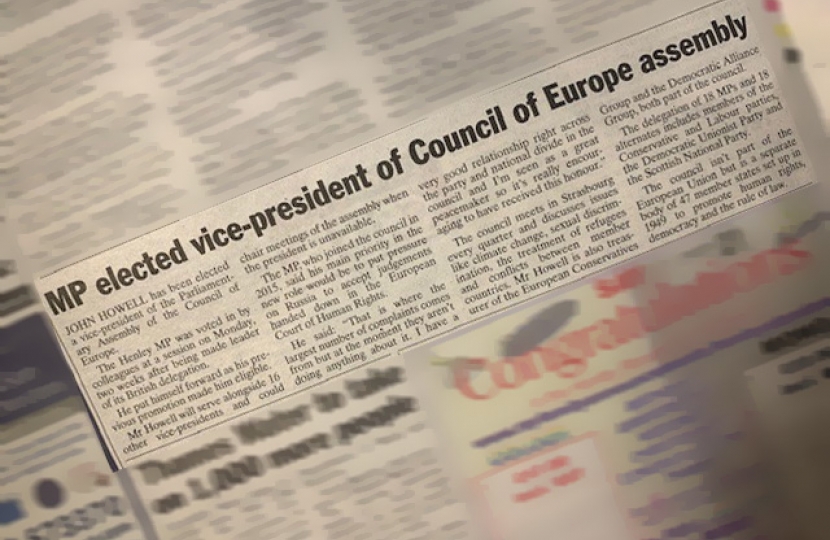 This week John was this week elected a Vice-President of the Parliamentary Assembly of the Council of Europe. The role involves him in acting as the equivalent of a deputy speaker of the Assembly.  He had earlier been asked by the Prime Minister to Lead the British Delegation to the Council. The role also involves the MP in assisting the President with his duties in the Council.

John said: “I am very honoured to have been elected to this position. I have tried to take a role of peacemaker within the Council. But there are unfortunately conflicts in Europe which need to be settled including between Azerbaijan and Armenia and between Russia and Ukraine and Georgia. I urge all states to follow the values of the Council. One of these values is human rights and it is a shame that two countries - Russia and Turkey – have more cases before the European Court of Human Rights than any others. I look forward to this role.”

The Council of Europe was founded in 1949, in the wake of the Second World War, to uphold human rights, democracy and the rule of law in Europe. It has 47 member states and remains an important link with our wider European neighbours. The Parliamentary Assembly is made up of parliamentary representatives from the members states and has to reflect the political balance of the country.

The Council meets in Strasbourg for plenary meetings which cover a range of topics including climate change, sexual discrimination, the treatment of refugees, conflicts between member countries such as Russia and Ukraine, and the monitoring of how well countries confirm to the three aims of the Council. It is also the lead organisation for monitoring elections across Europe.