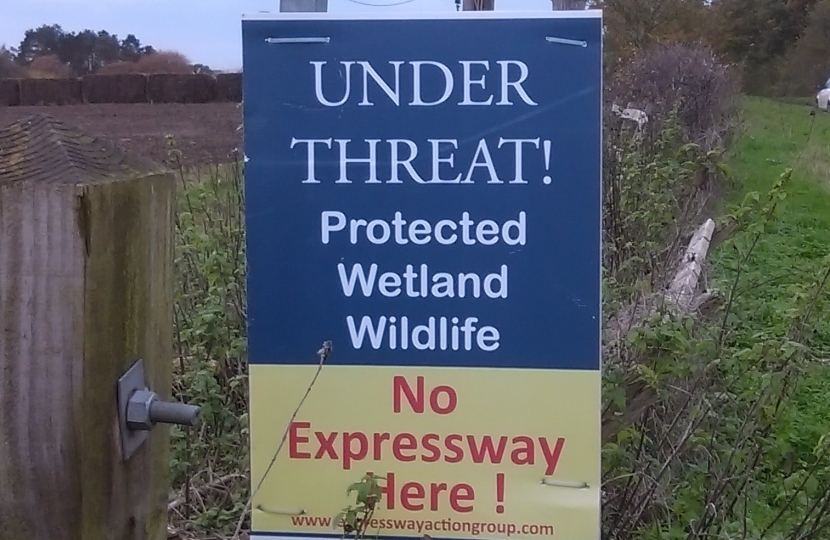 The idea of an Oxford-Cambridge Expressway was first set out in the Department of Transport Road Investment Strategy in 2015 at the time of the coalition between the Conservatives and the Liberal-Democrats. Wider interest and concern in the project seemed to emerge in 2018 and I have been involved more deeply since then. I have lobbied ministers and worked to get a good understanding of the wide range of issues involved. I am therefore well versed on the project and concerns and have discussed them on numerous occasions with Ministers and the Highways Agency.

At the beginning of May 2018, I organised a meeting of some 25 parish councils in the constituency about the Expressway.  I invited Ian Stewart MP, who was the Government Champion for the project, to come to answer questions people might have as part of a process of allowing those parishes from which I had received questions to raise them directly.  Since that date I have kept myself fully informed of the impact an Expressway is likely to have and have discussed the issue with constituents in the area. My view is that the Government is committed to cancelling the project and I expect a formal announcement shortly. In short, the Expressway is I believe dead.

I recognise that as time goes on my own concerns over the project have grown substantially. I do believe that the Oxford-Cambridge Arc with its link to Milton Keynes is important, but having talked with many over the last few years, and taking into account changes along the way, I think it is time to step back and challenge the need for a major road in 2030.  I am pleased that the rail link has been confirmed and hope that this will have the effect of linking up the 10 universities along the route to produce a powerful arc.

Through my discussions on the project I have a good insight into the particular concerns of different communities which I have fed back to Government and Highways England. As a result of my lobbying much more information has been released into the public domain and Highways England have came out to the area to do some local workshops. I was also instrumental in getting Ministers to rule out any route across Otmoor.

This is an opportunity to improve the A34 and also to bring relief to the villages running alongside the A34 which currently suffer when there are problems on the road.  It was through the work undertaken by me and colleagues that the Secretary of State understood that the Expressway had no support, least of all from us. I was pleased when the Secretary of State announced that the Expressway should be halted. The more I saw of the evidence the more I came to doubt what the project was trying to achieve.

The 1 million houses along the line of the route (not just in Oxfordshire) was never a government target.  It was an ambition which depended on individual councils including the figures in their local plans. SODC under a previous administration declined to do so. Others along the Arc have decided they want the houses.