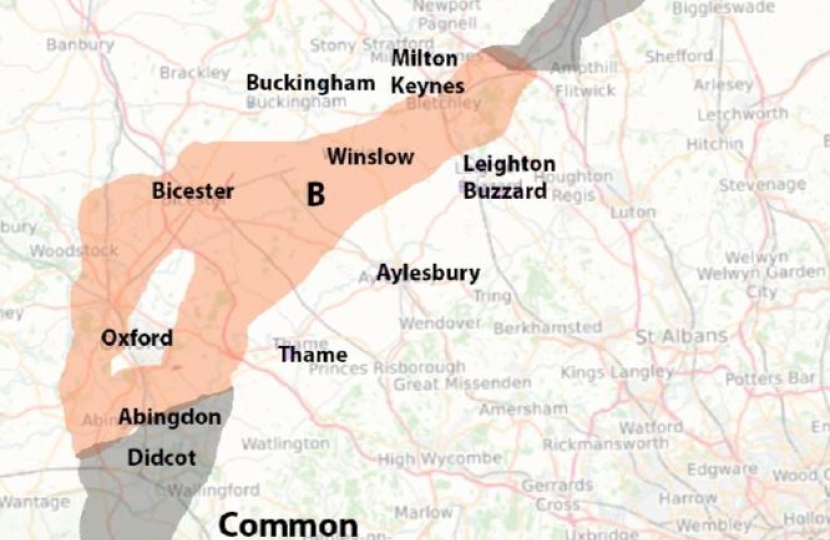 I have received a number of emails raising questions on various issues related to the proposed Oxford-Cambridge Expressway. This article sets out the background to the project and comments on some of the key issues that have been raised with me so far.

The proposed Oxford-Cambridge Expressway is one aspect of a much bigger strategic project being developed under the umbrella of England’s Economic Heartland (EEH). It is a project which does not stand on its own but is part and parcel of new railway links and improved digital infrastructure. It is also not a project just connecting Oxford and Cambridge. Although called the Oxford-Cambridge Expressway it is important to note that it will also link up with Milton Keynes. In addition, it is also about establishing connectivity between 10 universities along the route.

EEH is the sub-national transport body for the region which covers an area from Swindon to Cambridgeshire and from Northamptonshire to Hertfordshire which has been called the Oxford-Cambridge Arc This area has potential to contribute to our economy in an even greater way than it already does but is held back by a key issue of connectivity. The work is looking at what the regions transport and digital infrastructure needs will look like by 2050. In doing so, it must look at how we anticipate things will be at that date.

Let me say at the outset that this is not a project that I support blindly. However we have to be bold, we have to look to the future, and we have to do our homework. History has shown that a failure to invest in infrastructure is an error and we have to look to the longer term whilst also paying heed to current issues. For this reason I am supporting the research work being done. It would be short sighted not to do so. If in the end the work shows that the expressway does not add value to the Arc then it will not be built. At this stage we are not at that point.

This is proposed as a major infrastructure project and, as with all such projects, there will be questions and concerns. This is why they take a long time to develop and there are many processes to work through. In this case there are indeed many questions and answers and some answers are not yet available. Mis-information often circulates where there is a vacuum or where only part of the information is considered. I think this has been a problem with this project. However, I want to be clear that for all the reasons stated in this paper I do not believe that the road should go to the east and south of Oxford but should, as far as possible, follow the line of the A34 and of the railway.

Leaving aside the improved rail and digital links (with which few have a problem), the idea of the Oxford-Cambridge Expressway is not a new project. It was first tabled as part of the Department of Transport Road Investment Strategy in 2015 (i.e. under the Coalition Government) and, if built, it will not be ready before 2030. It is a key part of the strategy of forming a multi-modal transport spine for the region alongside the East West rail link.

I am fully aware that some are making a Party political issue of this but we need to look beyond the electoral cycle and take a lead in looking at future investment. If you look across the area covered by EEH you will find cross party collaboration on the research and consultation. At every stage of the way there is learning and refinement, and as I have already said, if in the end the case does not stack up it will not get the necessary support.

There is no doubt that there are some environmental concerns about the proposal, especially the route for the road. I have long campaigned to protect the Green Belt and continue to do so in relation to this project. I have also lobbied Ministers to ensure that Otmoor and other areas of environmental significance are protected. I have obtained a letter from the Minister categorically saying that the road will not cut across Otmoor. This has been part of the process of whittling down options in the work that Highways England has been undertaking during this year in meetings with key stakeholders including sessions with parish councils in the areas around potential routes.

I have suggested that we should use this opportunity to look at existing road corridors and take the opportunity to address problems with existing roads and the problems that many villages have with traffic especially Weston on the Green and Islip. A key opportunity is with the troubled A34. Although short term measures to relieve some of the problems with this road have already been put forward much more investment is needed. There could be an opportunity not only to address these needs but also to put in place measures to protect villages near to the road which experience over spill problems related to the A34.

There are indeed some environmental concerns related to emissions however these appear to be based on current concerns linked to what we have now. Some people have mentioned reduced journey times saying that to save 40 minutes on the journey between Oxford and Cambridge is insignificant in the grander scheme of things. Rather than focus on time I think this is more about reducing the miles. Reduced mileage means using less fuel and even in todays terms this has to be a good thing. But even this is short sighted. We are already seeing changes in fuel technology coming forward producing cleaner fuels and Government is investing a significant amount in this industry. Further the development of steady-state batteries will enable longer journeys in electric cars without recharging. This will be particularly important in rural areas where journeys tend to be longer than in urban areas.

The Automated and Electric Vehicles Bill which came into law in July 2018 makes provision for expanding deployment of electric vehicle charging points with requirements for provision at motorway service areas and large fuel retailers. It also establishes an insurance system for drivers of automated cars. Indeed Minister’s already anticipate that conventional petrol and diesel engines that rely on the internal combustion engine will not be on the market in the foreseeable future.

Further development such as electric vehicle and driverless cars will change the way in which we drive in future years. However they will still require roads. A stated aim under the EEH Transport Strategy is ‘that the region should set itself the ambition for our transport system to be zero-carbon by 2050.’

I was encouraged to read a statement from the chair of EEH's Strategic Transport Forum, Mayor Dave Hodgson. He said "The Heartland is one of the most exciting economic opportunities in Europe - an internationally renowned hub for science, technology and research. But economic growth has already brought with it increased pressure on our transport infrastructure, resulting in disruption, unreliability and pollution. Future growth must go hand-in-hand with environmental improvements, and investment in the transport system is crucial to achieving this. The way forward cannot be 'business as usual' – we must harness the region's reputation for innovation in order to do things differently.

Mayor Dave Hodgson added "The challenges and opportunities facing us are unique and complex. That's why we want to have a conversation with people and businesses focused around what they believe the transport system needs to deliver in the future. The Outline Transport Strategy is a significant milestone, providing us with the framework for that discussion. I'd encourage anyone with an interest in the region's future to have their say and help shape the detail of our future transport system."

We cannot get away from the fact that we need more housing. This need exists and is independent of any major infrastructure project. I understand that the road, if it is built, will be fully funded through Highways England and not dependent on housing. Any development associated with the Expressway is mostly already allocated in Local Plans across the length of the route. When our local authorities were asked by the Minister to increase this along the potential line of the route they refused to do so. Further the team at England’s Economic Heartland have written to the Minister to say that additional housing would detract from the aims of the project.

I can understand that when we see new developments being built we could feel that our countryside is being eroded. However recent statistics published by the Office for National Statistics make surprising reading. The figures show that overall 92% in England is non-developed land with 6% being developed in South Oxfordshire. I think this is a much lower figure than some people imagine.

The issue of consultation on this project has been raised and I have shared this concern. I have pursued this with the relevant Ministers and with Highways England. Local Authorities along the route have approached this in different ways. In some areas open discussion started at an early stage. In Oxfordshire the County Council took a decision to wait until proposals on the route are more advanced. I can understand their rationale but I think that the absence of engagement locally has helped create a vacuum which has been filled with some mis-information and also pre-determined views.

During this year Highways England has been undertaking much more consultation meeting with local councils to refine their knowledge of the landscape and identify specific areas that would be unsuitable. In other counties much of the potential route has already been agreed. It is at this Oxfordshire end that there is particular lack of detail. Highways England I have been advised that there are currently some 100 permutations for the route which Highways England are working to refine so that they can do out to public consultation later this year with a more manageable set of options. In refining the options I know that they are working with local people to look at detail such as environmental issues of which they have not been aware on a larger scale.

If you would like to read more or comment on the Outline Transport Strategy you will find details at  http://www.englandseconomicheartland.com/Pages/engagement.aspx