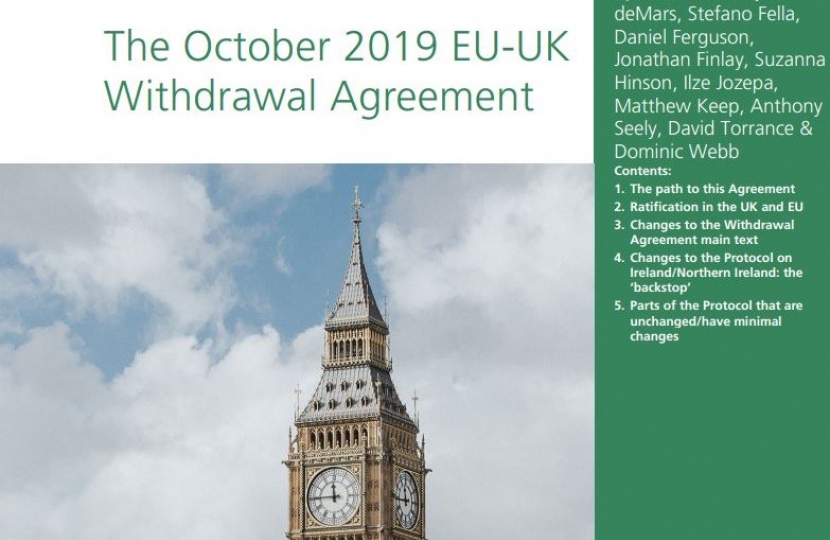 There has been much in the media about the time that the Leader of the House set aside for Parliament to discuss the Withdrawal Agreement Bill. This was set out in what is known as a Programme Motion. Although the Prime Minister won support for the deal he has negotiated he lost the vote on the Programme Motion and has thus withdrawn the Bill for the time being.

The Withdrawal Bill and associated documents has more than 435 pages and if the House had to considered all of this in detail then the time allocated may indeed have been too short. I was concerned too and investigated further. In doing so I turned to the House of Commons Library. This is an non-partisan service providing impartial briefings as a resource for all MPs. Often their briefings can help evaluate long documents.

Most of the agreement and the protocol have already been debated extensively, for example, when they were put to Parliament on three occasions in the past and when the White Paper was issued, which was also debated. Thus the entire 435 pages of legal text and the 104 page Bill do not need to be scrutinised again at this stage. Parliament has already scrutinised the vast majority of the documents. They need to concentrate on the parts which have changed.

It may have been helpful to have a little more time and I support the view that all that is required, at most, is an extra few days rather than the weeks envisaged by some. We will wait now to see what is scheduled going forward.