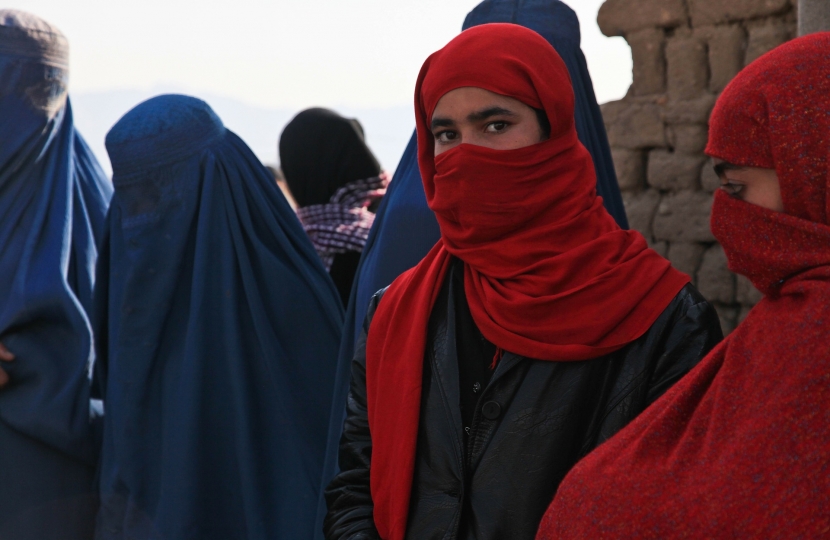 Parliament was recalled on Wednesday 18th August to debate the current situation in Afghanistan.  Although the House was full, I was able to make a contribution to the debate and I reproduce what I said below. In such a debate with many speakers it is important that each MP takes the opportunity to draw attention to particular issues rather than simply restate more general comments. I took the opportunity to draw attention to two specific issues that related to the constituency. I have already had what I see as deeply misogynistic comments in relation to the female musicians who are supported locally. Concerns for women and girls in Afghanistan has been raised by others too and those who make such comments do not appear to recognize the danger that the girls I mentioned are in. These comments are shameful. I have also set out below what the Government is doing in this situation.

“I have never been in the military and I have never visited Afghanistan, but I represent a constituency, and actually live in a village, where large numbers are and have. RAF Benson has provided helicopters to Afghanistan. Its Pumas have served in Afghanistan since 2015. How do I represent to them that what they have achieved has been a success? Yes, they have been involved in anti-terrorism, but they have also been involved in the process of state building. They are an exceptional team who have served well. They have been based at Kabul airport and have provided vital airborne transport. Look at the statistics of what they have achieved. They have done 12,800 flying hours. They have carried 126,000 passengers. They have also carried 660,000 kg of freight. We will offer our congratulations to them, I am sure, right across the House, for giving so much to that mission.

I also want to raise the status of a number of girls in Kabul who are active musicians. The young women and girls of the Afghan women’s orchestra and their peers at the Afghanistan National Institute of Music were special guests of the UK Government, and of an orchestra in my constituency, for performances in the UK in 2019. Promoting girls’ education and reducing the impact of conflict on women and girls used to be key priorities for the Foreign Office in Afghanistan. The achievements of the Afghan women’s orchestra embody the values at the core of those priorities, and for those reasons the Foreign Office was proud to be playing a role in the orchestra’s visit to the UK.

On Sunday night we received a text message from some of the orchestra. It said:

“Today I went to school. I wanted to practise. After a few minutes our teacher said go home because the situation and security is not good…It’s really dangerous because the Taliban even can’t hear the sound of music…I have no hope for the future of music development in Afghanistan.”

I feel great sympathy for those girls, and I ask Ministers to do what they can to make sure that those girls are released from that captivity and brought safely to the UK.”

What the Government is doing

The Government is establishing a new route for Afghan citizens to come to the UK - prioritising women and girls - who have been forced to flee their home or face threats of persecution from the Taliban. This is in addition to existing programmes and routes already established and in operation. It has established the new Afghanistan Citizens’ Resettlement Scheme to resettle thousands of Afghan women and children under one of the most generous resettlement schemes in our history. This new route is modelled on the successful Syrian Vulnerable Persons Resettlement Scheme, which resettled 20,000 Syrian refugees over a seven-year period from 2014 to 2021.

The Afghanistan Citizens’ Resettlement Scheme will prioritise women and girls, and religious and other minorities, who are most at risk of human rights abuses and dehumanising treatment by the Taliban. The UK is working with international partners to develop a system to identify those most at risk and resettle them, ensuring help goes to those that need it.

We will work with the devolved administrations and local councils to ensure that Afghans who will be rebuilding their lives in the UK have the help they need and support to integrate.

This new route is separate from, and in addition to, the existing safe and legal routes. These include:

Asylum and the Points-Based Immigration system.

The Government has also provided thousands of Afghans with asylum in the UK and many Afghan nationals have come to the UK to work and study under the Points-Based Immigration system. The Government’s ambition is to welcome up to 5,000 Afghans to the UK under the new Afghanistan Citizens’ Resettlement Scheme in its first year, with up to a total of 20,000 in the long-term. This is in addition to the 5,000 Afghans we expect to relocate to the UK this year under the Afghan Relocations and Assistance Policy. The complex picture on the ground means there will be significant challenges delivering the scheme, but the Government is working at speed to address these obstacles. This new route is in line with the Government’s New Plan for Immigration, which prioritises those most in need, and seeks to make the system fairer by protecting and supporting those in genuine need of asylum. The Government is clear that the new route will not compromise on national security and any person arriving on the route will have to pass the same strict security checks as those resettled through other schemes.

The Prime Minister has set out our plans to host a meeting of G7 leaders so that the international community can take a unified approach on Afghanistan, both in terms of the future of the country and in working to prevent a humanitarian and refugee crisis. It is also calling for emergency NATO and UN Security Council meetings as we use every diplomatic lever at our disposal. The Prime Minister spoke to NATO Secretary General Jens Stoltenberg and UN Secretary General António Guterres and called for meetings of NATO’s North Atlantic Council and the UN Security Council to take place as soon as possible to respond to the latest developments in Afghanistan. The Prime Minister also spoke to US President Biden, French President Macron and German Chancellor Merkel.

We are stressing the importance of any recognition of a new Afghan Government happening on a joint, rather than unilateral, basis. We are working with the UN, NATO and our friends and allies around the globe as President of the G7 and a UN Security Council Member to forge international coordination on Afghanistan with regard to recognition.

We are also working with our international partners to hold the Taliban to account on terrorism, human rights, and protections for women, girls, and minorities.

We have made it clear that the Taliban must protect and uphold human rights, including those of women, girls, and minorities – and that they can expect to face sanctions or the suspension of Overseas Development Assistance if they commit human rights abuses or host terrorist organisations.5 We are supporting the safe departure of British nationals and Afghans:

We are deploying 900 troops and civilian personnel to provide protection and support to evacuating British Nationals and Afghan staff.

We are deploying 900 troops and civilian personnel to the region to provide support to Operation Pitting. They will provide force protection and logistical support for the relocation of British nationals as well as Afghan interpreters, staff, and their families, and more are being deployed and held at readiness if needed.

Supporting British nationals returning to the UK with an FCDO rapid deployment team specifically trained to deal with crisis situations.

We have deployed an FCDO rapid deployment team of officials specially trained to deal with crisis situations to Kabul. They will work alongside Ambassador Laurie Bristow, who has remained in Kabul throughout, to support British nationals in Afghanistan to return safely to the UK.