John writes on the work of the Council of Europe 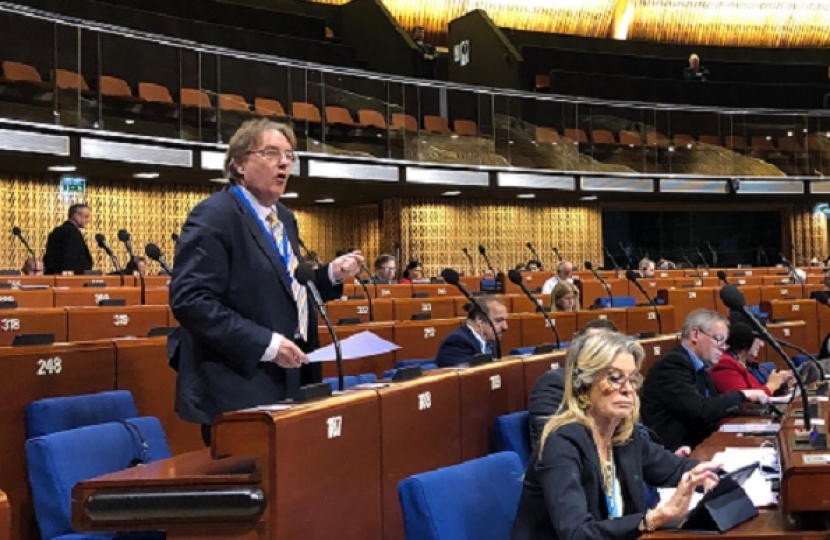 Council of Europe – a different way of behaving.

“Why are we still in the Council of Europe when we have left the EU?” was a question put to me by a colleague in the Conservative Parliamentary Party.  I tried to explain that the Council of Europe was not and had never been part of the EU.  That it did things in a very different way to the EU and was almost twice the size of the EU with some 47 members. That it had made a long and valuable contribution to peace and security across Europe. I also tried to point out that no country had become a member of the EU without first being part of the Council of Europe. In the end, I fell back on our old mantra that was simple and yet to the point.  We were in the Council of Europe because while we had left the EU we had not left Europe and this was now one of the most important ways of keeping contact across the continent and playing our part in seeing what positions needed a common view on European issues.  I could have also pointed our that the Council looks after the European Court of Human Rights (which is not and has never been part of the EU) and to which, as a member of the UK’s parliamentary delegation to the Council, I help elect the judges.

The conversation went on. “So, what has the Council of Europe ever done for us?” asked my colleague.  The Council was set up to ensure that human rights prevail across Europe.  It is the leading human rights organisation in Europe and most of what it does, it does through the prism of human rights.  But it also stands up for democracy and for the rule of law.

On a statutory basis the Council does not legislate itself. There is no equivalent of the EU Commission giving instruction.  What the Council does is set the standards that member states can apply through individual Conventions or Treaties that come through in member states’ domestic legislation.  It was, for example, the Council which started the debate about human trafficking which has come forward into UK domestic legislation and is at the centre of our foreign policy. It was also the Council which tackled the problem of protections for children and to ensure that they are kept safe from violence and exploitation.  The Convention for the Protection of Children against Sexual Exploitation and Sexual Abuse came into force on 1 July 2010 and aims to prevent the sexual abuse of children, including at home or in the family.  Another area with which I am very involved is in monitoring human rights in Turkey.  Keeping Turkey on course is crucial to a Europe that is pacific and calm.  Unfortunately, at the moment we have a situation where lawyers in Turkey are being attacked by the government and given heavy prison sentences for defending what are seen as “terrorism-related” individuals.  Lawyers should not be criminalised for exercising their profession or convicted on dubious charges and we are putting pressure on Turkey to review these convictions.

In addition, the Council of Europe played a pioneering role in the struggle for the abolition of capital punishment.  I have long opposed the death penalty and regard it as having no place in democratic society. The abolition of the death penalty is a precondition for accession to the Council.  No executions have been carried out in any of the member states since 1997.  I know that there are some in this country who take a different view, but I am not going to go into that here.

Some of the other ways in which the Council of Europe operates include scrutiny through a system of specific committees. It can also question Ministers, Prime Ministers and Presidents of Member States. The Prime Minister of the United Kingdom has in the past been questioned in this capacity.

On the question of upholding democracy, the Council conducts monitoring of elections around Europe to ensure that they are fair and free.  This is a crucial element of the Council’s work to make sure that all countries conform with proper election practice.  My suggestion, though, that the Council should monitor the last set of EU elections did not go down terribly well!  It also looks to take a common view on certain key issues such as the recent elections in Belarus and the role of Russia in a modern Europe.  Belarus is not a member of the Council; it has not given up the death penalty.  But the current post-election situation needs to be exposed which the Council is doing. Similarly, with the rule of law it has a body of legal experts known as the Venice Commission to which laws such as the new laws in Russia can be put for opinion as to whether they meet modern standards in human rights, the rule of law and democracy.  In addition, the Council of Europe has as associate members two groups which may cause surprise – Israel and the Palestinians.  Sadly, Israel is often treated with nothing short of anti-Semitism by certain sections of the parliamentary assembly of the Council.  Both groups tend to give predictable speeches about issues that affect them.  But just imagine what could be achieved if we could organise meetings where the Council tried to bring them together to talk about peace in the region and how to deal with settlements.

Finally, I want to touch on the European Court of Human Rights.  As one former Lord Chancellor made clear in answer to a question I had put, this is a court where we have well over a 90% success rate.  That is, many cases are simply not brought for hearing but are dismissed before they are even heard. This is no wonder when we have a judicial system that is so advanced and developed and a model of judicial approach.  States also have the power to derogate from individual elements of the European Convention on Human Rights provided they meet a number of conditions. The first of these is that there is a war or other public emergency threatening the life of the nation. The situation with regard to Covid-19 has raised issues in this respect but illustrates that the Convention is meant to be practical.

The Council of Europe was formed in 1949. The United Kingdom was foremost amongst its ten founding members and, under the leadership of Winston Churchill, the inspiration for its creation. It is part of the rules-based order in which we invest so much time and energy.  It is often accused of being just a talking shop.  But there is real value in having a place where major issues that face our continent can be talked through to see whether a common line is required and what that line should be.  And yet, whilst it is almost revered across much of Europe, this country rarely sends even a journalist to cover its proceedings.  It is necessary not only to take this organisation seriously but also to continue to show the real leadership it needs.

The original extension of free school meals was in response to the lockdown caused by the pandemic when schools were closed.