John reports on the latest session of the Council or Europe 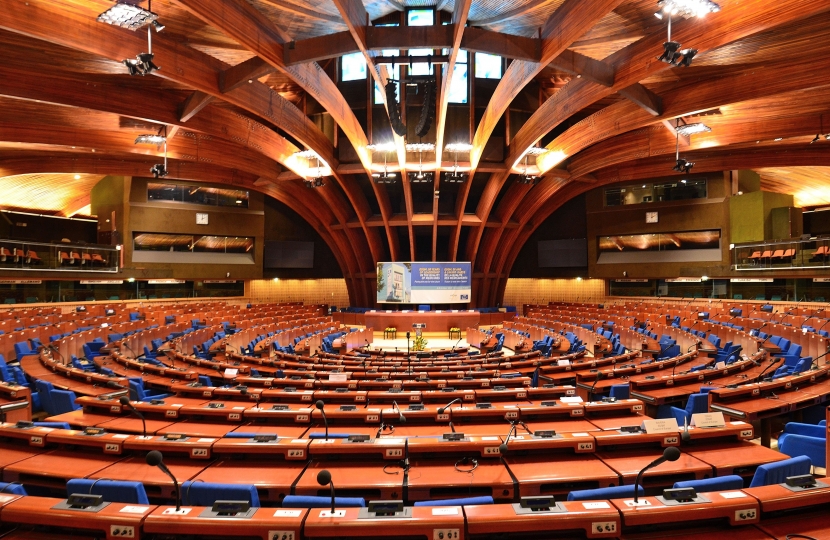 The third part of the yearly session of the Parliamentary Assembly of the Council of Europe took place between 21 and 24 June 2021. The agenda showed the Council’s involvement in what might be called the ‘softer’ areas of its work such as the impact of Covid-19 on children’s rights, the transparency of donations to political parties, and a European policy on diaspora. There were nevertheless some controversial issues such as the prosecution of politicians for political statements. In addition, it was Russia’s turn for judges to be elected to the European Court of Human Rights but these had been sent back to Russia to deal with perceived irregularities. A key element of the week was a review of the Istanbul Convention 10 years on on which I spoke to stress that some countries such as the UK had gone beyond the scope of the Convention  to improve the rights of women and to deal with domestic violence. Another issue which had to be dealt with was the issue of gender balance and how far this would be pushed within the Council.

This was hopefully the last meeting of the Parliamentary Assembly which will be dealt with in a hybrid form. Over 200 parliamentarians attended this time. However, the UK was not amongst them having been told that we must wait until France becomes a Green country under the UK traffic light system.  Nevertheless, I wrote to the Speaker asking that funds to send us back to Strasbourg be released.  One member of the delegation still has a small job connected with the EU and has made at least a dozen visits to Brussels and one to each of Luxembourg and Stockholm  in the last 12 months all of them covered by the Diplomatic Immunity clause of the European Parliament.  I have checked with the Council of Europe and they too share a similar diplomatic immunity provision.  According to this, therefore, we are technically able to be there.  In addition, I had a meeting recently with the President of the Committee for the Prevention of Torture at the Council of Europe.  He is a Scot and works at a prison outside Glasgow.  He had just returned from an official visit to Strasbourg where he had a number of meetings.  His fare and accommodation were paid for.  He was not asked to quarantine on arriving in France nor on his return due again to the status of the Council of Europe.  All of these points show up the unfairness of the current rules which seriously disadvantage the UK delegation as was pointed out by Lord Foulkes during the meeting.

Monitoring of parliamentary elections for Bulgaria and Albania

I mention the discussion which took place on these election monitoring visits because they are an important part of what the Council of Europe does.  The observation of elections provides a good insight into how elections are conducted and, for example, the influence that ruling parties have.  This is a very worthwhile activity of the Council and I note that we will have a big job in monitoring the fairness of the elections in Russia shortly. This is an activity which can only be conducted by us being in the country concerned to monitor the elections in person.

The following subjects were discussed:

There was general agreement that politicians should not be prosecuted for their political pronouncements.  It was noted however that a number of countries were merging the criminal and political reasons for prosecution.  The report highlighted the situation in Turkey where the Council once again demanded that Turkey comply with the ECHR judgment on Mr Demirtas and pointed to other political prosecutions of journalists and politicians.  The report also included Spain as an example of this sort of practice in relation to the prosecution of Catalonian officials after the referendum.  It was noted, however, that the rule of law applied strongly in Spain, that separatists still governed Catalonia and supported the central Government, and, that the individuals arrested had committed serious offences of embezzlement and sedition.  The only speaker from the UK delegation was me

Media freedom, public trust and the people’s right to know

This debate was essentially about media freedom and establishing a “right to know”.    There were strong contributions from 6 UK Delegation members in this debate.  Although they tended to follow party political lines, there were a number of points on which we all agreed, and these came across strongly.  The first of these was the commitment to media freedom and the need for a media that was genuinely independent of Government and of Opposition.  In addition, there were a number of points coalescing around Lord Griffiths’ point that an independent media was one thing but it was essential to have a population that was media aware and capable of making judgements for themselves. Media literacy was key. I made the point that UK had not signed the Tromso Convention, which governs this area, but that does not mean that the UK does not support the principles of transparency and media freedom.

There were three debates on Covid related topics including one on Covid and Children’s rights initiated by Baroness Massey. The debate on Covid certificates clarified the pre-conditions necessary for the use of Covid passes, and found their use “fraught with legal and human rights complications”.  It also depends on a high degree of certainty about medical risks.  A series of issues that would have to be addressed if such documents are to avoid being discriminatory were set out and they should take account of the relative effectiveness of different vaccines, including against variants, and the degree of risk involved. Certificates should not amount to coercion.

On the question of the social-economic crisis and how to get out of it, a report was put forward which recommended a number of suggestions most of which would be found politically unacceptable to the UK at present.

Finally, Baroness Massey’s report on the impact of Covid-19 on children quite rightly brought out that children’s physical and mental health had suffered, and their opportunities for learning and development were negatively affected. Violence against children had risen, including domestic and sexual violence, and in poorer countries concerns were raised over child mortality, child labour, child marriage and child trafficking.  She recommended effective protection of children’s rights in future crises.

We held a high-level panel session with distinguished members of various organisations including the Prime Minister of Belgium to discuss how we could encourage wider ratification of the Istanbul Convention.  The movement of the UK Government towards ratification was acknowledged by the Secretary General and I asked for the Istanbul Convention to be a living document and for additional measures to protect women discovered during the ratification process to be shared.

There was also a debate on enhancing the participation of women from underrepresented groups in political and public decision-making. Kate Osamor was the only speaker from the UK who pointed to the extent of on-line abuse faced by women of colour who are in Parliament and the efforts that were being put in place by the Speaker to tackle this.

There was general cross-party agreement, with the exception of Russia, that the human rights of the Crimean Tatars had been violated and that their rights to worship, to education in their native tongue and to freedom of expression and assembly had been consistently abused.  I pointed out that our attention should be firmly on Ukrainian political prisoners.

We heard from Antonio Vitorino, the Director General of the International Organisation for Migration.  He spoke on the important role diaspora communities played in communities and in achieving the UN Sustainability Goals and better human rights.  He called for greater co-operation to improve diaspora policies, to make Europe stronger and to encourage what diaspora have to offer individual countries.

Afrophobia or anti-Black racism was covered in this report.  This was heralded as an important moment of change for the Council. The report pointed to prejudice and abuse and the low representation of Black groups in parliaments.  It saw the origins of this form of racism in colonial history, enslavement and the transatlantic slave trade. It called for education, information and awareness. Sir Tony Lloyd and Kate Osamor spoke in this debate. Sir Tony pointed to the booing that took place at the recent Euros in Britain when the UK team took the Black Lives Matter knee, to differences in health outcomes and to the manslaughter of a black prisoner in the West Midlands. Kate Osamor said that little had been done to tackle racism in the UK.  The response by the UK Government to the Black History Month debate was singled out. She said that issues of racism had not been resolved and called for a racial equality policy for Europe.

Transparency and regulation of political donations

Transparency in the funding of politics is essential to ensure that democracy can function without interference. A donation is a contribution in money or in kind.  There is a need to ensure that the Council of Europe follows best practice in this area particularly with regard to the contributions made by NGOs.  In the UK, this includes the situation of a proxy donor where a donation is given on behalf of someone else.  The system needs a proper monitor.

There were two current affairs debates.  One was on Belarus, the other on migration.  There was general agreement condemning the actions of Belarus in forcing a Ryanair plane to land in Minsk.  There was also a general condemnation of Mr Lukashenko who is widely seen as having fraudulently stolen the Belarus Presidential election.  A good summary of the situation was produced by Sir Tony Lloyd who recommended that Mr Lukashenko should now go.

The debate on establishing a solidarity mechanism in Europe to relieve migratory pressure on front-line countries looked at how the pact between countries on migration can establish real relief both for countries and for migrants many of whom are vulnerable. Europe must prevent the smuggling of migrants. The Council of Europe heard from the Greek Minister of Migration and Asylum and heard about  the success of relocation programmes in the Greek islands.

Hungary now chairs the committee of Ministers.  The Minister, Peter Szijjarto, set out the priorities of the Hungarian chairmanship which were national minorities, protection of families, protection of rights to practice religion, and a healthy environment.  A lot of differing questions were raised but I asked the Minister how he would ensure that the distinctiveness of the voice of the Council of Europe was heard in the current debates around the future of Europe.  I am not sure I got a proper answer to this question.