John presents honour to the French town of Suresnes 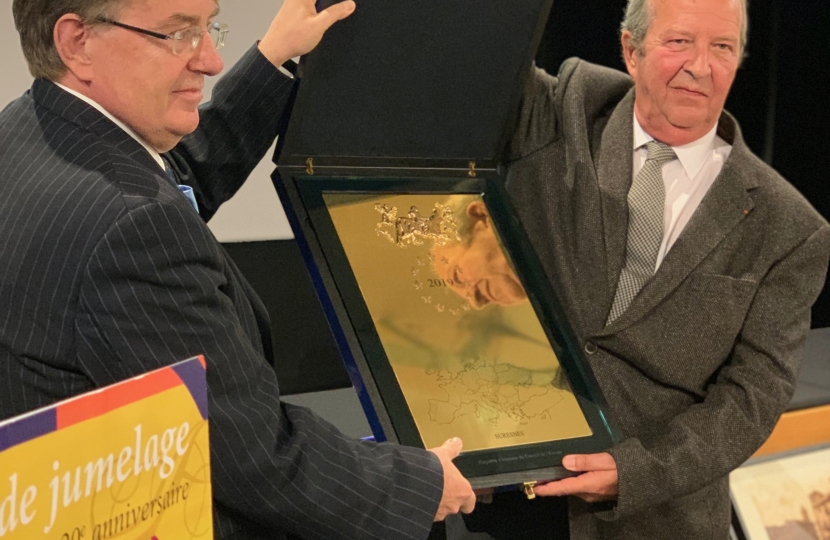 On behalf of the Council of Europe, John presented an important European award – the Plaquette d’honneur - to the French town of Suresnes, near Paris. The Plaquette d’honneur is one of the chief components of the Europe Prize awarded by the Council of Europe to the city or town which has shown the greatest action to promote the European ideals embodied by the Council’s three phrases: human rights, democracy, and, the rule of law.

Suresnes has put a lot of time into assisting the young develop their citizenship. It has also worked closely with Haiti to help children there. In addition, it has established close partnerships with Holon (Israel), Hackney (UK), Hann Munden and Gottingen (Germany), Villach (Austria), Kragujevac (Serbia) and Colmenar Viejo (Spain).

John presented the prize in a ceremony in Suresnes public hall attended by the Mayor, deputy mayors, councillors, representatives of the towns with which Suresnes is twinned and local children and their parents. John’s speech, which was entirely delivered by him in French, praised the way Suresnes included all its activities, educational, cultural, sporting and economic, to meet the objectives set by the Council of Europe for the prize and how in particular it was helping young people.

The Mayor of Suresnes, Christian Depuy, thanked John for the award and for his speech and for the great honour the Council had done in awarding the prize to Suresnes.

The Council of Europe is a non-EU institution, not to be confused with the EU. It is the only organisation which represents the greater Europe with 47 member countries and therefore almost entirely includes the whole of the continent of Europe. Set up in 1949, the Council has just celebrated its 70th year as the largest forum for European co-operation and focuses its activities on human rights through the European Court of Human Rights, fostering democracy and upholding the rule of law.