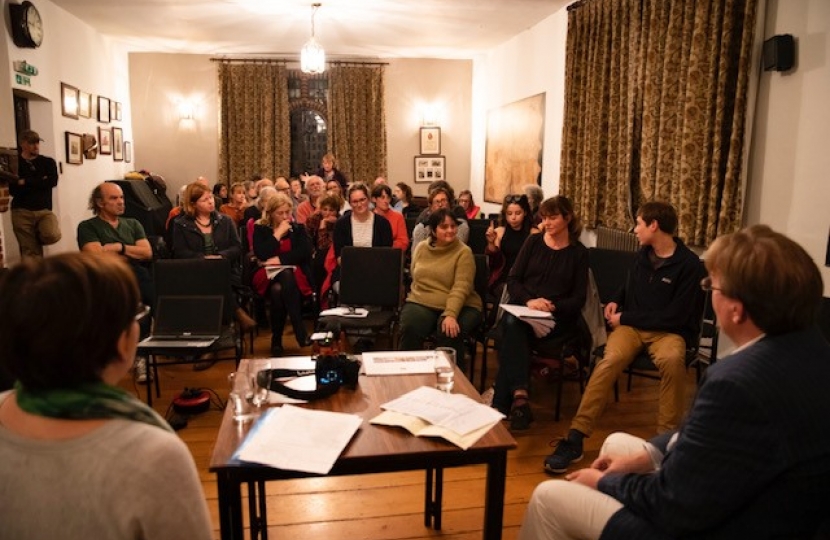 John met with members of Watlington Climate Action group to hear about their particular concerns and answer questions. The evening was attend by about 40 people from Watlington and surrounding villages. John began by giving the group a beech tree that he had been given the day before by Extinction Rebellion. He then listened to concerns and answered questions for about an hour and a half.

John said "I was pleased to be given the opportunity to meet with the group and learn about the issues that are most important to them. We are all on a journey with these issues and it is important to me to meet with groups around the constituency to understand their greatest concerns. There are things that each of us can do and things on which government and world leaders must take the lead."

John has joined the Conservative Environment Network (CEN) which is an independent forum with a Parliamentary Caucas. The Caucus is comprised of backbench MPs who are supported by the CEN to enable them to encourage Government ambition on decarbonisation and conservation.

In the course of the meeting John told the group about the work on the Parliamentary Estate to reduce waste, espcially that of single use plastics. He also mentioned his own personal actions to reduce his carbon footprint. These included taking the bus to London, taking the train to meetings in Strasbourg, and not having a tumble dryer.

The session was recorded and will be reported on further when the transcript is made available.