John comments on the situation in Israel, Gaza and the Middle East 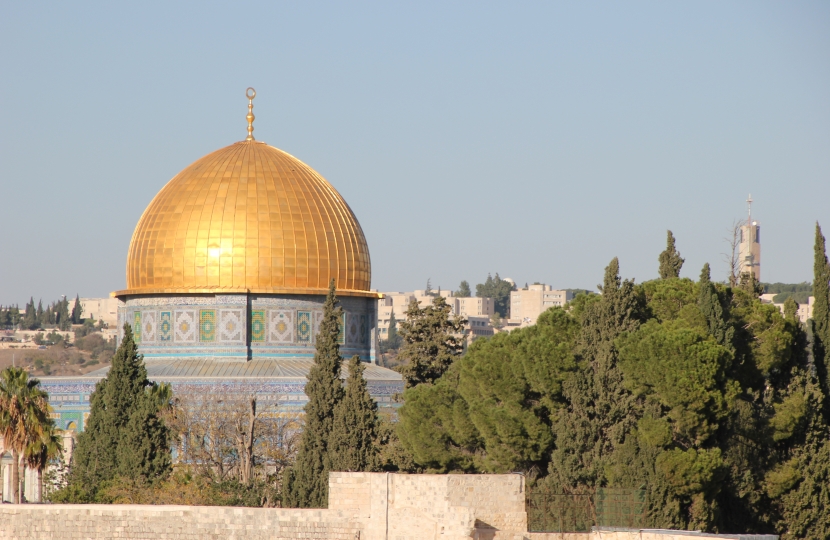 Like many of you, I am concerned by the escalation of violence in Israel, Gaza and in the Middle East. I have set out below a description of what has been happening in the region and I have tried to answer several questions which have been put to me.  The situation is continually changing and I sincerely hope that de-escalation of the violence will take place.

Since the beginning of the week (10 May), over 2,300 rockets have been fired towards Israel by what amount to nothing more than terrorists in the Gaza Strip. But approximately 350 of these rockets failed to make the distance and fell in the Gaza Strip causing death and destruction amongst Palestinians.  The Palestinian NGO Defense for Children has confirmed that eight Palestinians, including two children, were killed on Monday 10th May by a “homemade rocket” that “fell short” in Gaza.

Israel’s Iron Dome Missile defence system has intercepted around 90% of the rockets. But this has not prevented some nine Israelis from being killed in the attacks, and over 120 Palestinians from being killed in the Israeli airstrikes against Hamas-linked facilities which followed. However, a large number of those killed were members of terrorist groups. The Palestinian Islamic Jihad confirmed the deaths of seven of its members, while Hamas acknowledged that a number of top commanders and several other members were killed.

Three rockets were launched from Lebanon on Thursday, landing in the sea off the coast of northern Israel. It has been reported that a Palestinian group was behind the attack, not the Hezbollah terror group. On Friday, a number of Lebanese rioters broke through the border fence and created a fire in Israeli territory before returning to Lebanon.  The IDF has exposed 10 new Hamas terror tunnels this week, which I have seen for myself and which are designed to facilitate attacks and kidnappings of Israeli civilians. Over 160 Israeli aircraft have dropped 450 missiles on 150 targets.

Israel did not begin the violence

Tensions have been escalating in the region for at least a month – throughout Ramadan - following a series of inter-communal riots, videos of young Arabs attacking religious Jews, shooting and knife terror attacks against Israelis and the postponement of much-anticipated Palestinian elections, all set against the anticipated eviction of Palestinian families from Sheikh Jarrah in East Jerusalem following a long-running legal battle. The violence dramatically escalated on Monday 10th May after Hamas unexpectedly fired seven long-range rockets at Israel’s capital city Jerusalem (45 miles from Gaza) amidst the ongoing disturbances in Jerusalem – the first such attack in 7 years.

A series of increasingly worsening riots between 7th -10th May in and around the Temple Mount/Haram al-Sharif holy site prompted the Hamas terror group to threaten increased rocket fire unless Israeli police left the area. Around 50 rockets had been fired towards Israel from Gaza in 2021 before the latest round of violence. The two main Palestinian actors – Fatah and Hamas – have both called for violence and continue to incite the riots. A statement attributed to Fatah and publicised by official PA news agencies urged Palestinians to “raise the level of confrontation in the coming days”. Hamas official Fathi Hammad has called on Palestinians to buy a knife for 5 shekels and “cut off the heads of the Jews”.

On Tuesday 11th May Hamas fired 130+ rockets at Tel Aviv – the single largest attack on central Israel in the country’s history.  Israel has responded to the rocket fire with hundreds of targeted airstrikes against Hamas infrastructure in the Gaza Strip – which is often located in civilian areas, including schools, mosques and industrial areas.

Israel has not threatened or attacked the Al-Aqsa Mosque

Israel has not threatened or attacked Al-Aqsa Mosque. It continues to allow Muslim worshippers to visit and hundreds of thousands have visited during Ramadan. As many as 100,000 Muslims celebrated the end of Ramadan, Eid al-Fitr, on the Temple Mount. However, Palestinians have been rioting at the holy site throwing rocks and launching fireworks and firecrackers. Images have shown that the riots were premediated with rocks being stockpiled, including inside the mosque, and barricades prepared. For several days, Israeli police used antiriot measures (stun grenades and rubber-coated non-lethal bullets) on the Temple Mount/Haram al-Sharif in an attempt to disperse rioters but this ended up in tense violent exchanges with the rioters. During the clashes on 7th May, stun grenades fired by Israeli police ended up in the Al-Aqsa Mosque from which rioters were throwing rocks and fireworks.

Flags, posters and banners of the Hamas terror group have appeared at the holy site in recent weeks, including a banner praising Hamas leaders. Israel regards this as an example of the incitement which has provoked violence at the riots. On the last Friday of Ramadan (7th May), an estimated 70,000 worshippers gathered outside Al-Aqsa Mosque reportedly chanting “We are all Hamas…Shoot a rocket at Tel Aviv tonight”. Israeli law mandates that everyone, regardless of religious affiliation, has the right to visit all holy places within Israel. Thousands of Muslims worship at the Dome of the Rock/Haram al-Sharif and at Al-Aqsa mosque on the Temple Mount every week. But Israel prohibits Jewish prayer at the site so as not to inflame tensions, and control is given to each religious authority over their respective holy sites. Israeli law enforcement does not tolerate the abuse of the holy sites by extremists whose premeditated objective is to instigate violence.

A high-profile legal dispute that could lead to the eviction of around 70 Palestinians from their homes in the Sheikh Jarrah neighbourhood of East Jerusalem has been a source of recent violent protests and clashes between local Arabs, far-right Jewish extremists and Israeli police.  Israel’s Supreme Court is set to make its ruling on a complex, decades-long litigation over land ownership in the area. This judgement on whether to uphold the expulsion order was expected to take place on Monday 10th May but was delayed following an attempt by Israel’s Attorney General to deescalate tensions in the city and to review the case.  The State of Israel is not a party to the dispute and until now has seen it as a private real-estate dispute between the Palestinian families and the pro-settler organisation Nahalat Shimon, which reportedly bought the land two decades ago.  Extensive litigation over many years has been about whether the Palestinian residents hold proof of ownership. However, as protected tenants, a mutual arrangement was agreed in 1982 that the Palestinians could continue living there as long as they paid rent and maintained the properties. In February 2021, the Jerusalem District Court upheld an earlier court decision that after non-payment of rent and illegal construction on the property, the Palestinian residents must vacate the premises. The tenants appealed to the Supreme Court, and a hearing was set for Monday 10th May.

The planned evictions will not go ahead before the rescheduled Supreme Court hearing and it is expected Israel’s Attorney General will now present the state’s position in the case as a result of its sensitivities.

Israel directs fire only at enemy combatant targets, using as much force as is necessary to thwart future attacks. “Proportionality” does not mean responding to an attack with force equivalent to the force of the attack.  Israel seeks to minimise harm to non-combatants and civilian infrastructure by urging Palestinian civilians to stay away from Hamas facilities ahead of airstrikes.