John comments on the Health and Social Care Bill 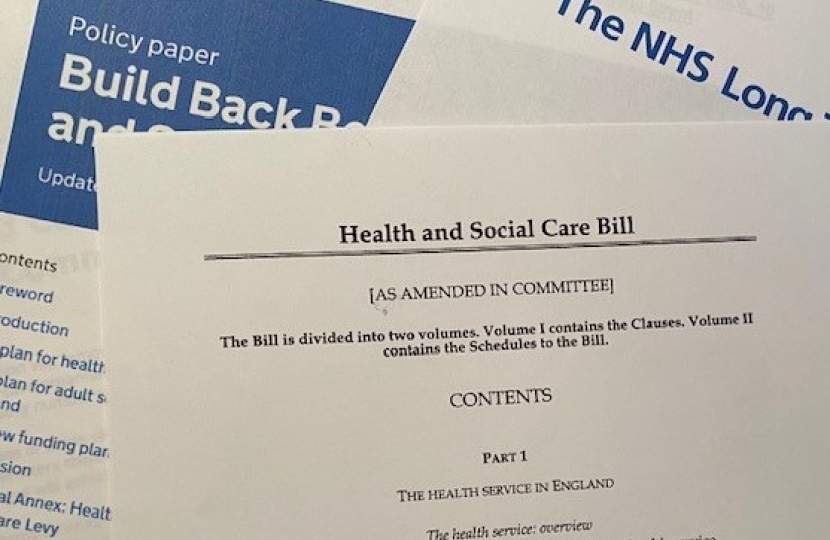 There has long been crossparty agreement that we need better integration of health care and social care. Indeed this is a key part of the NHS Long Term Plan first published in January 2019. It was NHS England and NHS Improvement who asked the Government to make legislative changes. In the document ‘Legislating for Integrated Care Systems’ five recommendations were made to Government asking for an Integrated Care System to be put on a statutory footing with maximum local operational flexibility. The Bill seeks to meet these recommendations.

The suggestion that this is fragmenting the NHS is wrong. The NHS is currently made up of a number of organisations under the umbrella of NHS England which has the overview. NHS England remains but instead of over 200 Clinical Commissioning Groups there will be 42 Integrated Care Systems. These Integrated Care Systems will give local people, local clinicians and NHS organisations more control over the way health and care services are delivered.

On the use of private providers this is nothing new. The previous Labour  Government expanded the independent sector and competition into the NHS between 1997 and 2010. The Kings Fund, an independent charity, has said about the reforms: “This Bill will remove cumbersome competition rules and make it simpler for health and care organisations to work together to deliver more joined-up care to the increasing numbers of people who rely on multiple different services.”

I do appreciate that there are concerns about private sector involvement in Integrated Care Boards. It is important that people are assured that the work of ICBs will be driven by health outcomes. I was pleased see that the Government amended the Health and Care Bill, putting beyond doubt that the Integrated Care Boards will not be controlled in any way by the private sector. The ICB chair would have the power to veto members of the board, and there are robust requirements on ICBs to manage conflicts of interests. The Government tabled an amendment on this which makes clear that no one may be appointed to an ICB who would undermine the independence of the NHS, either as a result of their interests in the private healthcare sector, or otherwise.

On the issue of the cost of care I understand the concerns especially in relation to the local authority contribution to the cost of the care of an individual. I have read the transcript of the Treasury Committee where Sir Andrew Dilnot CBE was giving evidence on this issue. (Sir Andrew was chair of the Commission on Funding Care and Support in 2010-21.) The evidence given notes that in some areas the proposals by the Government in this Bill are more generous than the Commission recommended and also some that are less generous.

Also giving evidence to the Treasury Select Committee alongside Sir Andrew was Sally Warren, Policy Director of the Kings Fund. Sally made an important point that given that there were a number of parameters where things are either more or less generous, what is important is to get the structure of the system right. The mix of parameters would then be something that can be debated and amended over time.

I think it is important that we have this structure in place. There is no doubt that increasing the threshold above which people have to meet the full cost of their care from £23,250 to £100,000 is clearly more generous and the £86,000 cap is better than no cap. I accept that the figures may not yet be the best, but at least this has been costed.

Some have suggested that the Bill will divert funding away from the NHS. I cannot see how this conclusion has been reached. Following the 2021 Spending Review, NHS England’s day-to-day budget is set to grow by 3.8 per cent on average up to 2024/25, supporting the NHS to tackle the elective backlog, deliver its Long Term Plan and ensure it has the resources needed to fight COVID-19. Spending on health services will increase from £133 billion at the start of this Parliament, to over £177 billion by the end: an increase of over £44 billion.

Concerns have been raised on planning for the future workforce for health and social care. Before the debate an amendment was proposed which required the production of a workforce accountability report at least every five years. I understand that the Department for Health and Social Care had already commissioned Health Education England to work with partners to develop a long-term 15-year strategic framework for the health and social care workforce. I also understand that Health Education England is to be merged with NHS England which will bring long-term planning and strategy for healthcare staff recruitment and retention to the fore. I welcome this ongoing work which is indeed vital.

The Bill still has some way to go through the House. Some excellent points were made in debate which I fully anticipate will be taken into the debate and amendments that emerge from the Lords when the Bill returns to the Commons. For the time being we have to let the Lords take their time to scrutinise where the Bill is at present and I await their feedback with interest.