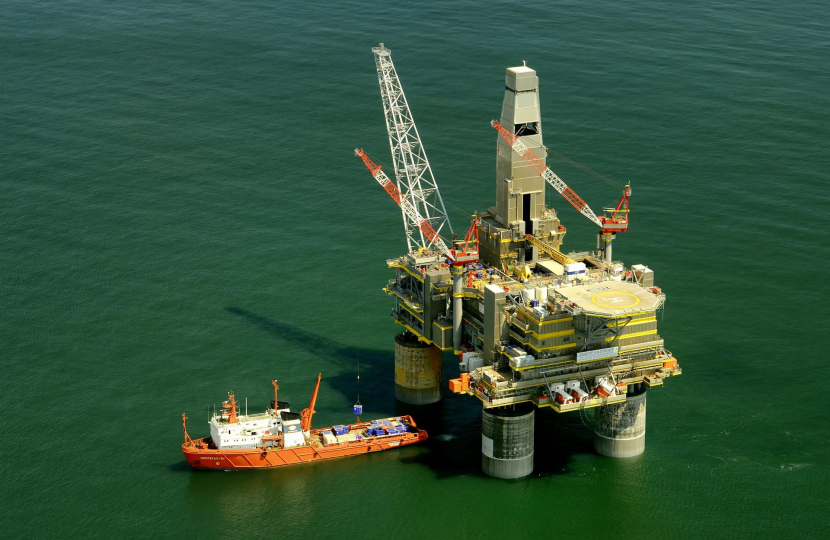 Working with Žygimantas Pavilionis, a Lithuanian MP, John has co-authored an article on ending a reliance on Russian fossil fuels in Europe. The article, titled 'Together we can defund Putin’s war machine and end Russia's energy supremacy', has been published in The House magazine and is copied below.

Vladimir Putin thinks he can blackmail Europe into giving up on Ukraine because of our collective addiction to Russian fossil fuels.

He hopes that squeezing gas and oil supplies will force the West to appease his imperial vision for Russia in order to abate a cost of living crisis. He's wrong, and if we work together, we can defund his war machine and end Russia's energy supremacy.

Ditching Putin's gas and oil is a huge challenge for many European countries. As a whole, Russia supplies 40 per cent of Europe's gas and coal and 30 per cent of its oil. Sadly, too many nations actively chose to continue relying on Russia for supplies. The invasion of Ukraine was the long-awaited wake-up call for those who didn't see past Putin's veil.

The consequence of Europe's reliance on oil and gas is that we have bankrolled the very war machine that Putin is using to try to annex Ukraine. As we seek to right this wrong, we cannot only sanction those responsible for the appalling invasion of Russia and look to expand the protective umbrella of Nato to Finland and Sweden. We must also carve Russia out of our energy network.

Countries like the United Kingdom and Lithuania offer an example to others, although there is still much to be done. Both of our countries are largely free of Russian gas and oil supplies thanks to separate actions in 2014 that strengthened each nation's energy security.

For the UK, the introduction of the Contracts for Difference (CfDs) scheme turbocharged our renewables sector. The scheme uses an auction to set a price for new renewable electricity projects, which is then guaranteed for 15 years, giving energy firms the confidence to invest. That's why British renewables are now four times cheaper than gas and now provide 43 per cent of electricity, compared to just 7 per cent in 2010.

For Lithuania, it was the completion of the floating liquefied natural gas (LNG) terminal and the LNG carrier, Independence, that enabled the country to diversify its supplies. Thanks to this and two electricity power bridges built to Sweden and Poland, Lithuania was able to stop importing Russian gas in response to Putin's abhorrent invasion of Ukraine. And this May, the new Polish-Lithuanian gas interconnection started operating, allowing the country to supply its imported LNG to Poland.

Neither of our nations is hugely dependent on Russia and both exemplify the future of European energy. Building cheap, clean and homegrown renewables and diversifying our supply with the help of friends and allies. Like climate change, we cannot tackle Europe's energy insecurity without urgent international cooperation.

While some foolishly brushed off Putin's threats to cut off Europe's energy supplies as posturing, it is no longer a just threat. Gazprom has stopped its exports to Poland and Bulgaria after the two countries refused to pay in Roubles. This isn't even the first time Russia has pulled this move. In 2006, Putin stopped the oil supplies to Lithuania via the Druzhba pipeline to pressure Vilnius politically.

With 90 per cent of the world's economy now covered by net zero targets, there's no path to total energy sovereignty through extracting more fossil fuels. The North Sea is a mature basin, so it is increasingly expensive for the UK and Norway to extract more for domestic use and export. But clean energy offers us a path forward to protect our environment, create new skilled jobs and strengthen our national security.

It's also key to tackling the cost of living crisis, which the Kremlin hopes will weaken western resolve regarding sanctions and ditching Russian supplies. Renewable energy is now the cheapest new energy available and other net zero solutions like insulation can quickly lower people's bills. Doubling down across Europe will only drive innovation, cut costs further, and create jobs for the countries that lead the way.

Other net zero technologies, such as heat pumps now widespread across Scandinavia or electric vehicles hitting the roads across Europe, can help our energy security. The former because it offers a way to heat our homes without relying on gas boilers. The latter means we will rely less on oil to keep people moving.

The UK has a huge opportunity to become a net exporter of energy again by grasping the colossal wind power in the North and Irish Seas. Similarly, Lithuania plans to rapidly scale up its renewable sector to provide 93 per cent of its electricity mix by 2035. Our goal should be to use interconnectors between European allies to create a new thriving clean energy market free from Russian interference.

The challenge facing Europe is enormous, but together it is deliverable. While we may be two members of parliament representing people on opposite sides of Europe, our nations are bound together by more than shared values. As members of Nato, we are bound to defend each other's sovereignty and freedom from aggressive states.

In the face of Putin's invasion and blackmail, that cooperation should extend to energy policy to save Ukraine and safeguard our Baltic, Polish, and soon-to-be Finnish and Swedish Nato allies who border the Russian bear. The economic sanctions imposed by the international community are already affecting Russia's economy.

We can immediately impose an embargo on Russian oil and gas through international cooperation.