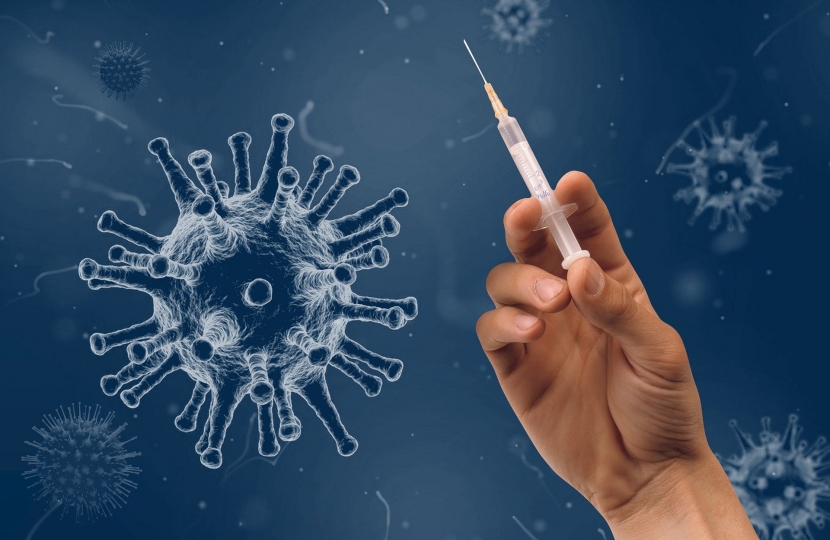 The COVID vaccination programme is one of the most optimistic things that has emerged in recent times. Inevitably there are many questions around it, and I have received a lot of emails and calls on different issues. In this article I will try to answer the most common questions that I have been asked to date.

In trying to deal with the virus a key concern has been to try to prevent the NHS becoming overwhelmed in order that they can treat the most seriously affected and try to save lives. This has underpinned all of the restrictions that we have faced over many months now and it also underpins the priorities for the vaccination programme. Details and updates can be found in the report of the Joint Committee on Vaccination and Immunisation (JCVI).

The programme for the roll out must be objective, especially in a situation where emotions run high. There have been several questions on the priority of different groups of people. In one sense no one is more important than anyone else, and it will be wonderful when everyone who wants to receive the vaccine has been able to do so. However in determining the phasing of the roll out, after vulnerability, the JCVI has to look at risk of exposure to the virus. Details of this can also be found at the above link. The Government has also published details of the Vaccination Programme which is updated as changes are made to the roll out with new sites coming on stream and increased time slots in some places.

Some very generous people have asked me if they can bypass their vaccination to allow some other person to receive it. The spirit of this is much appreciated but in truth we need everyone who is in the specific categories to have the vaccine. Without it they remain vulnerable and so are at risk of needing hospitalisation should they contract the virus. Thus it defeats the object of trying to protect pressure on the NHS.

More locally, in conversation with the Chief Executive of the Oxfordshire Clinical Commissioning Group which is heavily involved in the rollout, I have been reassured that in Oxfordshire we are on track to meet the Government schedule. Inevitably it is taking time to get different locations set up to administer vaccines in a safe way for everyone. In some places this has been quicker than in others and thus there are differences in the timing for different GP networks. This is being resolved as quickly as possible with more and more sites becoming operational including pharmacies.

I am also assured that there is a steady supply of the vaccine and it is being used as it becomes available. As you may have seen in the media the production is being done as quickly as possible, with batch tests on every batch produced to ensure safety. There may be some difference in the precise dates of vaccination for particular groups in different parts of the country, but it is only a matter of days. The Government is concerned to make sure that distribution is evenly spread across the county so that vulnerable people nationwide are protected.

The three vaccines that have been approved by the Medicines and Healthcare products Regulatory Agency (MHRA) are all highly effective and have only been approved after meeting required safety, quality and effectiveness standards. The availability of the different vaccines is to some extent dependent on practical issues. When a second dose is offered it must be the same vaccine as the first dose.

I appreciate the concern at the change of advice with the administration of the second dose of the Pfizer vaccine. The Medicines and Healthcare products Regulatory Agency (MHRA) has clarified that for this vaccine the interval between doses must be at least 3 weeks and while efficacy is optimised when a second dose is administered considerable protection is offered after a single dose.

In the light of the MHRA advice the JCVI has now recommended that as many people on the priority list as possible should be offered a first dose of the vaccine as the initial priority and that the second dose of the vaccine may be given up to 12 weeks after the first. The four UK Chief Medical Officers support this position. This approach will protect the greatest number of at-risk people overall in the shortest possible time, and will have the greatest impact on reducing mortality, severe disease, and hospitalisations, and in protecting the NHS.

The Government does not have any plans to make the COVID-19 vaccination mandatory for British citizens and there can be no discrimination going forward in relation to this. However we will continue to encourage everyone to come forward in their turn. There is concern that certain groups are more reluctant than others to receive the vaccine and this could lead to increased vulnerability. It is clear from the evidence that the virus does not distinguish between people in any way and thus everyone is potentially vulnerable.

There have been media reports about the development of so-called 'Immunity Passports' which could be used to enable people to safely access certain venues. Once someone has had a vaccination they will be issued with a card by the NHS which will state the name of the vaccine, as well as the batch number and the date of each dose. However this should not be considered an immunity passport, and the Government has no plans for the card to be used in this way.

It is important to remember that it takes time to build immunity after receiving the vaccine and those who have been vaccinated must remember that others have not yet had the benefit. Hands, space, face will remain the mantra for some time yet.

Questions have rightly been asked about initial delays in getting medics offering to come out of retirement to help. Checks do need to be made to ensure that people are who they say they are, but this should not delay things unnecessarily. The Health Secretary has been urgently streamlining this process. Many former members of NHS staff have applied to become vaccinators and I understand that tens of thousands have already completed their online training. Offers of help are being processed as quickly as possible and vaccinators will be deployed as and when they are required. The Government is also working with the Royal Voluntary Service and St John Ambulance to recruit and train thousands more volunteer vaccinators. These people will have all the relevant clinical training and supervision to ensure they can vaccinate in a way that is safe for patients and for themselves.

The full list of sites offering vaccinations in England is also published by NHS England.

Throughout this pandemic we have seen great acts of generosity and community spirit as people have done all they can to help and support one another. I am therefore sad to have received reports from GP surgeries of people verbally abusing staff as they have wanted higher priority for themselves. I too have received calls along the same lines.

I am sure that most of us will be relieved when we personally have the protection of the vaccine, but we must be patient and we have to look at the collective good. Our turn will come and in the meantime we must all continue to follow measures to protect one another whether we have been vaccinated or not. There is no place for selfishness in this, only by working together and showing mutual respect will we be able to get back to a way of life that we would prefer.