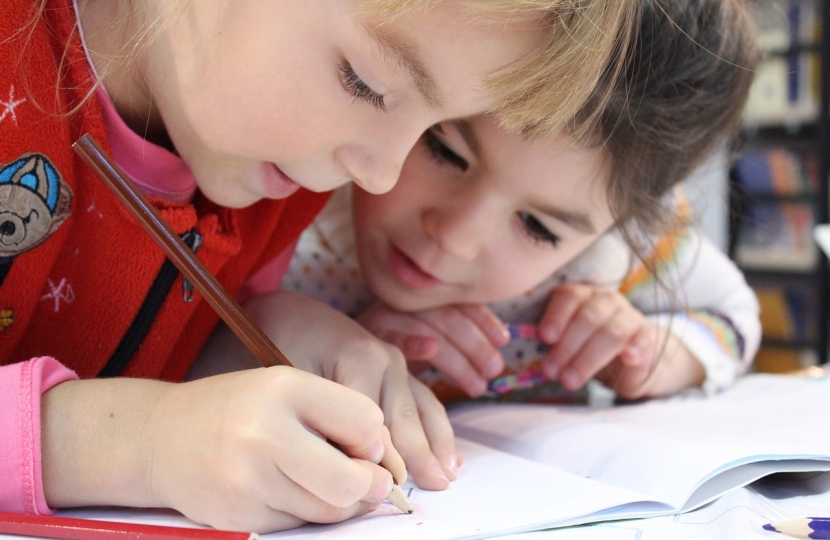 A number of people have written to me with observations on school funding. I am happy to respond with a detailed analysis.   I do of course recognise that there are cost pressures on schools and I am doing all I can to raise these with the Department of Education. But we have come a long way and I would like to set out where we are. I have obtained detailed information from the Ministry of Education which I am happy to share with you.

There has been no cut to the central budget for schools; quite the reverse. In fact, the core schools and high needs budget will rise to a record £43.5bn next year.

UK spending is also high by international standards. In 2015 (the latest year for which the analysis is available), the UK spent as much, or more, per pupil, on primary and secondary state education as any country in the G7, apart from the United States. Among G7 countries, the UK spent the highest percentage of GDP on state spending on primary and secondary education in 2015 (3.8%), which put us both above the OECD and EU22 averages (3.2% and 3.0% respectively).

We have also taken on the historic challenge of introducing a fair national funding formula, to ensure that resources go where they are needed most – not based on accidents of geography or history.

In December, we published local authorities' allocations for 2019/20 under this which allocated at least 1% more funding per pupil and up to 6% for the most underfunded schools over two years (compared to 2017-18 baselines). Local authorities will continue to use this funding to set schools' budgets, in consultation with schools, to reflect local circumstances.

The issue is not therefore the overall funding for schools. This remains at record levels and talk of cuts to this is completely inaccurate. It is the fact that many schools have set out how they see cost pressures outstripping the funding that is available. Let me take some of these categories individually and set out what we are doing with them.

Teachers' pay grant: in addition to the money schools are receiving through the national funding formula, we are providing £508 million over two years to help schools with the cost of a teachers' pay rise (the largest in almost ten years) – the difference between the 1% increase schools would have been budgeting for, and the higher award the department set (3.5% main pay range, 2% upper range and 1.5% leadership range).

Teachers' pensions: additionally, we will cover for state schools and FE providers who are obliged to offer the Teachers' Pension Scheme (TPS) the increased costs of pension contributions, which underpin one of the most generous pension schemes in the country – an important part of the remuneration package for teachers. We have recently closed a public consultation on this, where we invited evidence relating to the impact on all sectors covered by the TPS, in advance of determining final funding arrangements in due course.

Capital funding: at the Budget the Chancellor announced an additional £400 million this year for capital projects in schools and other eligible institutions. We announced final allocations for individual institutions at the end of January and payments were made at the start of February.

High needs: in December, we announced a further £250 million funding for high needs over this year and the next, recognising the particular concerns that have been raised about the costs of making provision for children and young people with the most complex special educational needs and disabilities (SEND). We also announced an additional £100 million to provide the specialist facilities that children and young people with SEND need, bringing the total investment of capital funding to £365 million between 2018 and 2021. We know that the additional funding, on its own, is not the only solution, which is why at the same time we announced funding for more Educational Psychologists; in-depth research on the impacts of different types of provision and a new SEND leadership board to improve commissioning; evidence-gathering on the financial incentives in current arrangements, in particular on the operation and use of mainstream schools' notional SEN budget, which pays for the costs of SEND up to £6,000; and reviewing current SEND content in Initial Teacher Training provision and building on our existing SEND specialist qualifications.

What this means is that we are on course to create 1 million new places this decade, the biggest expansion in two generations. Already 825,000 places have been created since 2010, including through expansion of good and outstanding schools. There are now 443 free schools open across the country, with another 263 in the pipeline. This contrasts with a net loss of 100,000 school places in the six years running up to 2010. Between 2004 and 2009, 236 primary and secondary, 98 special schools and 76 PRUs closed.

I do, of course, recognise that there are still pressures on school budgets beyond these amounts, and schools rightly will always want to do more for their pupils. As well as continuing to ensure that we invest properly in our schools, it is important how that funding is used in practice, so that schools can direct the maximum resource into what they do best – teaching. That is why our Supporting Excellent School Resource Management strategy is working with the sector to help schools reduce costs and make the most of every pound eseocially with regard to support staff and recrutiment.

Education is key for individual life success and for the success of our economy. We need a National Funding Formula that is fair for all. I have made my concerns known on the unfairness of the current formula in Oxfordshire to the Secretary of State for Education on several occasions.