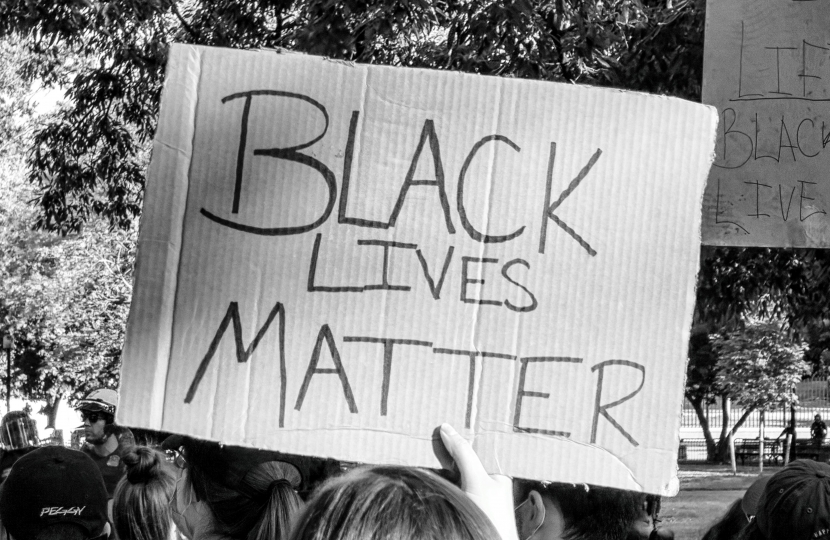 Throughout my life I have tried to ensure that discrimination plays no part in society. Any sort of discrimination is unacceptable. The recent violence of the protests in Parliament Square and Whitehall was inappropriate while calls to adhere to the Covid-19 regulations appeared to be too little and too late. This has made trying to achieve the aims of the protests all the more difficult.

The emails I have received regarding racial injustice both in the USA and the UK have been triggered by the abhorrent killing of George Floyd in Minneapolis, an unarmed black man who was choked to death by a Minneapolis Police officer last Wednesday. His death has rightly sparked outrage across the world and I am pleased to see that the charge against the police officer in question has been upgraded to second-degree murder. I also understand that the three other officers who were present but did nothing to stop the killing of Mr Floyd will now also face charges relating to aiding and abetting second-degree murder and second-degree manslaughter. I support this decision.

Having read through the emails relating to the death of George Floyd, it is clear, however, that there is also a range of other racial concerns to comment on. These include UK sales of tear gas, riot shields and rubber bullets to the USA; the UK’s stance on President Trump’s use of force against protestors; and whether racism is an equal problem in the UK as it is in the USA. Other issues raised include the tragic death of Belly Mujinga, the report into BAME Covid-19 deaths and the desire to add black history to the school curriculum. I will attempt to answer all of these points below.

The Prime Minister at PMQs said “I certainly condemn the killing of George Floyd, and we will certainly make sure that everything that we export to any country around the world is in accordance with the consolidated guidance on human rights.”  The UK’s process for granting export licences for the sale of tear gas, riot shields and rubber bullets is guided by these strict criteria. Risk assessments are undertaken in each case before these export licences are granted and decisions are kept under constant review. In the case of the USA, I do not yet know whether these criteria have been breached. In recent days, we have seen large-scale rioting and violence across the US, and I urge all sides, both police and protestors, to de-escalate tensions. There is no place for the use of force against peaceful protestors; I am in favour of the right to peaceful protest. However, when protests turn violent, it is important that the police retain the ability to maintain order. When protests turn violent, innocent people die. This is illustrated by the terrible murder of David Dorn, a retired St Louis police captain, who was fatally shot whilst trying to protect local businesses from looters.

RACISM IN THE UK

My antipathy to discrimination includes racial discrimination. But I do not accept that the UK is inherently a racist country. On the contrary, independent research suggests that the UK is consistently ranked as one of the least racist places to live in Europe. Indeed, this point was flagged up in the House of Commons yesterday by my colleague Kemi Badenoch MP, (herself a Nigerian) who called for an end to playing politics with the issue and the characterisation of the UK as a racist country. I am proud to stand alongside Kemi and all of my colleagues in the Conservative Party, as we all seek to build a better society for everybody, regardless of ethnicity.

Within Government the Race Disparity Unit (which sits within the Cabinet Office) was established specifically to collect data on this issue and to inform others within Government and across other sectors elsewhere to ensure that policies to do lead to disparity.

Turning to the death of Belly Mujinga, I was shocked and saddened to learn that Ms Mujinga had died after being spat at during her shift at Victoria station. The British Transport Police did initially launch an investigation into Ms Mujinga’s death but have since announced that they are not taking further action, as I understand that senior detectives are confident that the appalling incident at Victoria station did not lead to Ms Mujinga contracting Covid-19. The government continues to reinforce the key message that companies should take action to protect their staff, including risk-assessing their employees before clearing them to go to work.

With regard to the report into BAME Covid-19 deaths, I am pleased that this report by Public Health England (PHE) has now been published. The report can be accessed by clicking on the following link: https://assets.publishing.service.gov.uk/government/uploads/system/uploads/attachment_data/file/890258/disparities_review.pdf.  As the Prime Minister said at PMQs it was this Government that commissioned the review from PHE and there obviously are inequalities in the way the virus impacts on different people and different communities.  That is why the Minister for Equalities will come forward with practical steps to undertake.

In response to calls for black history to be added to the school curriculum, this is something for the Department for Education to consider. Personally, I have no problem at all with black history being taught as part of the curriculum, as long as it is carried out in a responsible and educational manner.

The Prime Minister said in PMQs “I think that what happened in the United States was appalling and inexcusable. We all saw it on our screens. I perfectly understand people’s right to protest at what took place, although obviously I also believe that protests should take place in a lawful and reasonable way.”  He finished by saying “Of course black lives matter, and I totally understand the anger and the grief that is felt not just in America but around the world and in our country as well. I totally understand that, and I get that.”  I think that makes the point very clearly.

Finally, I have worked extensively in Nigeria as the Prime Minister’s Trade Envoy and am pleased to have so many friends there. My approach has always been to work with the Nigerians on a truly partnership basis. I believe we have both benefitted from that and it illustrates my commitment to non-discrimination.